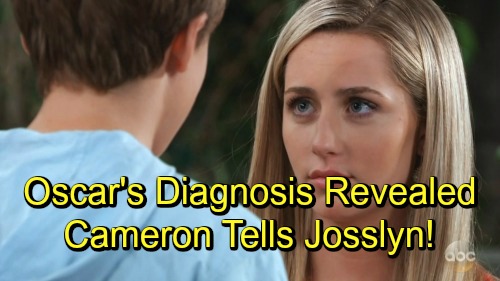 General Hospital (GH) spoilers tease that Oscar (Garren Stitt) will put Cameron (William Lipton) in an uncomfortable position. Oscar has just learned that he has an inoperable, malignant brain tumor and he’s going to need some time to process the information. It will be hard to come to terms with the news, and eventually the word is going to get out about his condition and he’ll have to deal with other people’s reactions to his condition.

That’s going to be a lot for a teenaged kid to manage. And for the time being, Oscar may decide that he doesn’t want his peers to know the truth about his condition. He may worry that the other kids will treat him differently if they know that he has cancer.

And there’s one person in particular who Oscar will probably dread telling about his condition, and that’s Josslyn (Eden McCoy). GH spoilers indicate that Oscar may want to keep his condition a secret from Josslyn for the time being, but it’s going to be difficult since Cameron knows the truth. Cameron has some impulse control issues and tends to be a blabbermouth.

GH spoilers say that Cameron will be stuck in the middle of an uncomfortable situation. It certainly sounds like Oscar may ask Cameron to keep the truth about his cancer a secret from Josslyn, but will Cameron be willing (or able) to do so? It will be hard for him, especially since Josslyn already suspects that something’s going on with Oscar and keeps questioning him about the matter.

And it looks like Cameron will eventually get to the point where he’ll outright refuse to keep the secret any longer, as GH spoilers say that Cameron will refuse to lie for Oscar. He might put Oscar in the position of having to tell Josslyn about his condition before Cameron does. One way or another, Josslyn’s going to find out, but the question is who will tell her.

Who do you think will ultimately tell Josslyn about Oscar’s condition? Oscar or Cameron? Stay tuned to the ABC soap and don’t forget to check CDL often for the latest General Hospital spoilers, updates, and news.