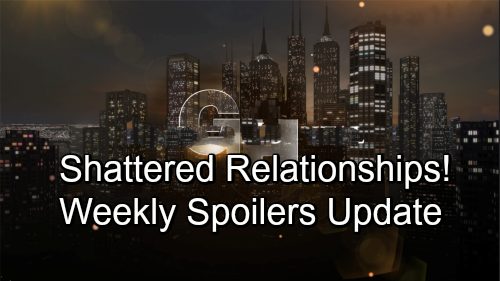 General Hospital (GH) spoilers for the week of October 1-5 tease that things will heat up in Port Charles. First, Ryan (Jon Lindstrom) will do his best to fool Laura (Genie Francis). He’ll have a hard time keeping up the Kevin (Jon Lindstrom) charade at first, but he’ll find the right groove eventually.

Laura will still think something’s off with her hubby, but she’ll assume she’s to blame. She’ll feel like they can fix this now that she’s back home to stay. Of course, Ryan’s sinister plans will prevent real progress! Later, Lulu (Emme Rylan) will be taken aback. She’ll get a surprise that leaves her overjoyed, so that’ll undoubtedly be a reunion with Laura. These ladies need some time to catch up.

Lulu will also bond with Chase (Josh Swickard) this week. They’ll share a deep conversation and grow closer in the process. Over with Peter (Wes Ramsey), he’ll continue to keep Maxie (Kirsten Storms) at a distance. Maxie will finally realize Lulu’s to blame, so expect a confrontation between these besties.

General Hospital spoilers say Maxie will develop suspicions about Nina (Michelle Stafford) as well. She’ll sense that Nina’s pretty shaken up about something. Maxie isn’t the kind of gal who just leaves a situation alone. She’ll inevitably grill Nina and try to get to the bottom of her troubles.

Will Nina have some ideas about her daughter’s identity? She’ll just want to do what’s right, but figuring out what that is could prove difficult. Over with Sonny (Maurice Benard), he’ll rip into Ava (Maura West). Perhaps this will be about Ava’s efforts to keep Kiki (Hayley Erin) and Avery (Ava and Grace Scarola) apart.

Ava will want Jason to back her up for some reason, but there’s no guarantee he will. Still, that won’t stop Ava from seeking his support. Jason will also reassure Sonny about the Margaux (Elizabeth Hendrickson) drama this week. He’ll promise to stay on guard and take care of this mess, but Sonny will remain on edge.

Other General Hospital spoilers say Oscar (Garren Stitt) will shut Drew (Billy Miller) out. He’ll feel hurt about being kept in the dark on his condition, so it’ll be tough for Drew to make it up to him. Josslyn (Eden McCoy) will get some comfort from Carly (Laura Wright) across town. Whether Joss is in the loop at that point or not, she’ll need her mom by her side.

Finally, GH fans will see a warm moment for Julian (William deVry) and Alexis (Nancy Lee Grahn). Although Alexis may lash out at times, she still cares about her ex. Maybe there’s still a shot for these two down the road!

General Hospital viewers won’t want to miss all the twists and turns ahead. We’ll give you updates as other GH news comes in. Stick with the ABC soap and don’t forget to check CDL often for the latest General Hospital spoilers, updates and news.