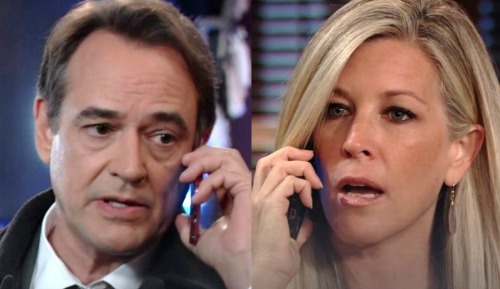 As Carly deals with her pain, she’ll need to talk to someone in particular. On December 10, Carly will head over to the cemetery and have a little chat with Morgan. He won’t be there physically, but she’ll still sense his presence. Carly will just want to work through some of her emotions and tell her son how she’s feeling. She feels close to Morgan at his grave, so that’s where she’ll pour her heart out.

Carly may feel like Morgan and Kiki have been reunited in death. It might give her some comfort to think of them watching out for each other. Once Carly’s finished this round of mourning, she’ll turn her attention to “Kevin” aka Ryan (Jon Lindstrom). Carly has already been dealing with suspicions about “Kevin,” but those suspicions will really rev up in the coming weeks.

General Hospital spoilers say Carly just won’t understand what “Kevin’s” doing. She’ll realize Ava (Maura West) and “Kevin” are growing closer than ever, so she’ll hate how much this is hurting Laura (Genie Francis). Carly will have some sympathy for Ava and her difficult situation, but she certainly won’t give “Kevin” a pass for trashing his marriage and moving on so quickly.

Of course, Carly also caught Ryan tapping SOS out in Morse code a while back. She undoubtedly filed that away to recall later. That probably won’t come into play again just yet, but some other clues could surface in the meantime. GH spoilers state that Carly will have a reason to corner “Kevin” on December 12. Something peculiar will leave her in need of some answers.

Ryan will have to keep an eye on this threat over the next couple months. If Carly gets too close to the truth, what will Ryan do about that? He’s already killed twice, so planning another murder would be no sweat. Carly isn’t going anywhere, but that doesn’t mean she won’t face some very real danger!

General Hospital fans won’t want to miss the next phase of this hot plot. Carly could be digging down a risky hole, so we’ll give you updates as other GH news comes in. Stay tuned to the ABC soap and don’t forget to check CDL often for the latest General Hospital spoilers, updates and news.