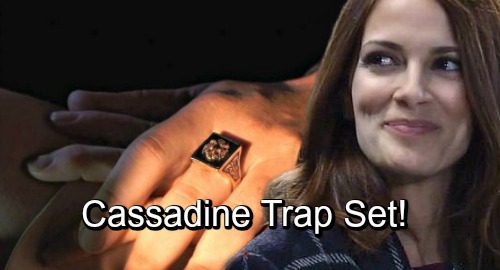 General Hospital (GH) spoilers tease that Finn (Michael Easton) will consider his options. He recently got a letter from Hayden (Rebecca Budig), which spoke of “unfinished business” and pushed for a meeting. Hayden suggested that they could talk in Italy and resolve a few things.

Of course, this is complicated for Finn since he’s moving full-speed ahead in his relationship with Anna (Finola Hughes). He’s feeling torn between the love of his past and the love of his present. Finn could choose to ignore the letter, but he’d always have to wonder what Hayden wanted. Can he just leave her hanging like that, especially when it’s obvious he still cares about her?

However, agreeing to meet would come with risks as well. Finn doesn’t want to hurt Anna or get sucked back into Hayden’s painful drama. There’s even another risk that Finn hasn’t thought about. Since chaos is always just around the corner for Finn and Anna, can we really trust that this letter is all it seems to be?

Hayden was pretty adamant about leaving Finn behind the last time we saw her. She lied about having a miscarriage in her previous note. This time Curtis (Donnell Turner) received some words of congratulations about his wedding in the mail. He revealed that Finn’s letter came along with it.

What about Liz (Rebecca Herbst)? Why didn’t Hayden contact her sister, who she’d grown closer to before she bailed? Perhaps Liz wasn’t given anything because she’s not necessary for this plot. Curtis was a good messenger for Finn to trust. He’s been a good messenger for Valentin (James Patrick Stuart) as well, so maybe he’s wrapped up in another Cassadine scheme he doesn’t have a grip on.

General Hospital left some loose ends dangling after Cassandra (Jessica Tuck) was brought out of her coma. Someone with a Cassadine ring kidnapped her, so when it that going to come into play? It’s possible Hayden wrote that note under duress. There’s even a chance it was fabricated entirely. Regardless, this would serve as another form of bait for Finn if he’s needed for something.

After all, General Hospital spoilers keep pointing to some huge Cassadine story. Hayden was involved with Nikolas (last played by Nick Stabile) once upon a time. There could be a connection here. On the other hand, GH may be cooking up some Stefan (Stephen Nichols) or Victor (Thaao Penghlis) angle. They’ve been planning a twist for a while now, so anything’s possible on the ABC soap.

Whatever the case, Finn could be walking straight into a trap if he agrees to meet with Hayden. Is his medical expertise in demand again? What Cassadine shockers might be brewing? We’ll give you updates as other news comes in. Stay tuned to GH and don’t forget to check CDL often for the latest General Hospital spoilers, updates and news.