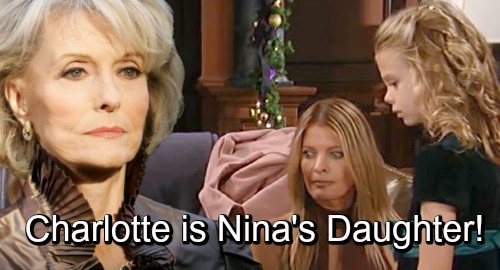 General Hospital (GH) spoilers tease that Nina Reeves’ (Michelle Stafford) long-lost daughter storyline will bring more bombshells. Her secret kid may have been right under her nose for quite some time. Even though GH writers have somewhat explained the assumed parentage of Charlotte Cassadine (Scarlett Fernandez), the story’s full of holes. There may be a way to pull Nina into all this.

Valentin’s story was that he was seduced by Daphne on Helena’s orders, which secured his sperm. Now that we know Valentin a little better, we have to wonder if we can trust that story. Charlotte’s original birth certificate is also pretty puzzling. It listed that she was born in the 1990s, which raised some questions for GH fans. 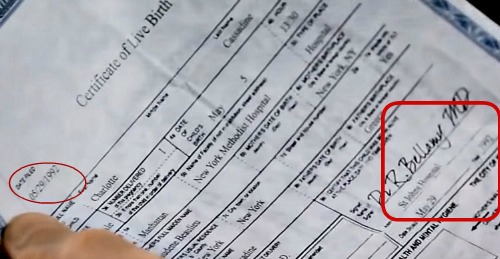 Nina was certainly in sync with Charlotte’s attitude on Friday, November 16. That episode brought some bullying from Nina, just like in class with Charlotte. Nina crossed the line with Ms. Willow Tait (Katelyn MacMullen), which left Valentin embarrassed and apologetic. She also kept referring to Charlotte as her daughter instead of her stepdaughter. That could be a hint about what’s to come.

So how can GH explain Charlotte being born in the 1990s and still have her be a third grader? Could this somehow come together to reveal Charlotte as Nina’s long-lost daughter? Any DNA tests that proved Valentin as Charlotte’s father and Lulu as her mother could’ve been faked.

There was a second document later that showed the IVF procedure and listed Charlotte’s birth year as 2009. If her birth certificate was altered to show Valentin as the father and Claudette Beaulieu (Bree Williamson) as the mother, then it was Dr. Belamy’s mistake for failing to change the birth year. It must’ve been fixed off screen so Charlotte could get a social security number and attend school.

Of course, the mistake would’ve been corrected long before Lulu got a copy. That leaves us with the task of explaining how Nina’s baby girl led to the embryo implanted in Claudette years later. We can’t forget that Madeline Reeves (Donna Mills) and Liesl Obrecht (Kathleen Gati) are sisters. Liesl was involved with or chasing Cesar Faison (Anders Hove) for many years.

Faison was involved with the Cassadines for that long, too. After all, Valentin kept an eye on Heinrik Faison aka Peter August (Wes Ramsey) from birth. He kept his distance from the main family, but he was still around. Plus, selling the Chimera Project to Helena is what financed all Valentin’s surgeries.

Helena developed a stasis protocol where people (and most likely fetuses or embryos) could stay frozen, but barely alive. They could remain in this state for many years. It’s the same procedure that Dr. Robin Scorpio-Drake (Kimberly McCullough) brought Drew Cain (Billy Miller) out of several years back. He was believed to be Jason Morgan (Steve Burton) at the time.

Through Liesl, Madeline could have arranged to have Nina’s fetus removed at a very early stage. She might’ve had the developing placenta removed as well and handed it over to Helena for freezing. General Hospital could be cooking up some twists that draw upon plenty of GH history.

Remember that Britt Westbourne (Kelly Thibaud) was the surrogate for Lulu and Dante’s (Dominic Zamprogna) embryo. That led to Rocco (O’Neill Monahan) and was long after Lulu had been imprisoned by Stavros and frozen herself. At that time, Helena was also in stasis until Stavros brought her out of it.

What if this twenty-something year old embryo of Nina’s was mislabeled as Stavros’ and Lulu’s before being implanted in Claudette? Helena hated and feared Valentin. Why would she want him to father a child for Stavros, who by that time was already dead? Some deception could’ve easily been going on here.