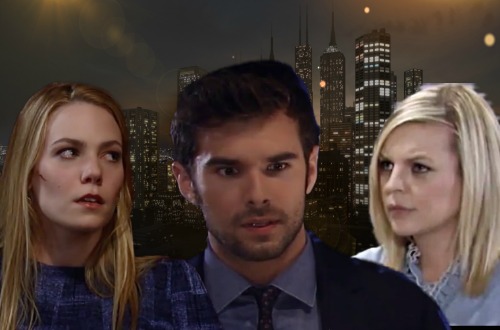 General Hospital (GH) spoilers tease that a new love triangle could be brewing. It’s clear that GH has done about all they can do between Michael (Chad Duell) and Nelle (Chloe Lanier). She’s been trapped in the Corinthos bubble from the moment she hit town. It’s definitely time for Nelle to move on and perhaps find love elsewhere.

Although it’s crazy to give Nelle another shocking backstory, at least she’s tied to someone new on canvas. Chase (Josh Swickard) loved Nelle once upon a time and maybe those old feelings are still buried under the surface. Nelle seems to care about him on some level, so GH could be setting up a complicated reunion.

On Twitter, Chloe Lanier gushed over her talented scene partner. Before Chase and Nelle’s first faceoff, Lanier offered plenty of praise. She tweeted, “Stoked for you guys to see @josh_swickard ‘s work today on @GeneralHospital!”

Later, a fan let Lanier know how much she enjoyed their scenes. She said she’d love to see more of Nelle and Chase together. Lanier suggested that everyone should “keep watching” and added a winking smiley face emoji.

General Hospital spoilers say Nelle and Chase have a quite a story coming up, so it makes sense that they’ll share the screen often. Will Chase fall for Nelle again? Will Nelle be manipulative as usual or could we see some genuine love? It’d be refreshing to see a sensitive side of Nelle for a change.

Of course, there’s no need to make Nelle a total good girl! Every soap needs a schemer, so it’d be wise to leave Nelle a little sneaky. Some competition could pull her right back into the darkness. That brings us back to the love triangle we mentioned. Could another woman enter the picture and change the game?

If General Hospital decides to give up on Maxie (Kirsten Storms) and Peter (Wes Ramsey), they’ll need new love interests. Chase might be the perfect fit for Maxie. As a handsome and caring detective, he’s certainly Maxie’s type. She may have reservations about choosing a man in the same dangerous line of work, but the heart wants what it wants.

Kirsten Storms also tweeted about Josh Swickard recently. After retweeting a Chase and Maxie Twitter account, Storms chimed in with her own praise for the actor. She said, “Im happy you guys are liking my scenes with @josh_swickard. He’s adorbs and so much fun to work with! Great scene partner.”

Storms might be on board for a possible romance. Chase has had several nice moments of bonding with Maxie, so there’s potential here. Will Chase end up torn between Maxie and Nelle? Since Nelle already hates Maxie’s guts, this could really rev up the drama!