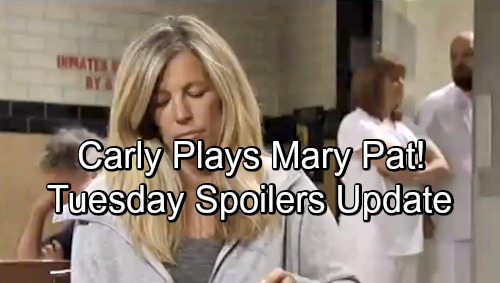 General Hospital (GH) spoilers update for Tuesday, June 19, tease that Anna (Finola Hughes) and Finn (Michael Easton) will bond in bed. They’ll gaze into each other’s eyes and concentrate on their future together. Finn will suggest that they can handle whatever comes their way. Their romance has been confusing at times, but they sorted through their feelings and will continue to ride the waves.

At the Metro Court, Sam (Kelly Monaco) will praise Alexis (Nancy Lee Grahn) for her hard work. She’ll think it’s great that her mom’s so focused on therapy. Now that Alexis is learning more about her deep issues, Sam will think she can change the course of her life. She’ll talk about how much she admires Alexis and push her to keep going.

In Kevin’s (Jon Lindstrom) office, he’ll catch Franco (Roger Howarth) off guard. General Hospital spoilers say Kevin will mention a wedding present. He’ll have a little something for Franco, even if it’s just wise advice. Kevin’s always full of helpful guidance, so that may be what he has in mind.

Regardless, Franco will get some form of a gift while Liz (Rebecca Herbst) talks to Scott (Kin Shriner). During their discussion, Scott will hint that Liz needs to loosen up. He’ll wonder where her sense of adventure is. Liz won’t look too amused, but she won’t let Scott get to her. This might somehow tie in with the “Friz” nuptials. Scott may think Liz needs to be more open to Franco’s ideas. 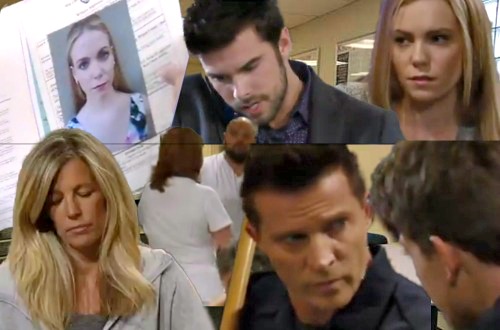 Franco would love a big wedding that includes Liz’s family. Liz, on the other hand, remains wary. She’d rather avoid the potential pain and just stick with something simple. However, it seems Franco’s determination will win out in the end. He’s still sneaking around and contacting relatives, so he’s overriding Liz’s wishes and going with his gut. Franco had better hope the risk is worth it!

In the meantime, Chase (Josh Swickard) will get in touch with somebody over the phone. Perhaps it’ll be his former partner or someone else he used to work with. Chase will suggest that Nelle’s (Chloe Lanier) trail hasn’t gone completely cold. He may not be able to take her down for Zackary Grant’s murder, but he could catch her in another scheme.

Chase will examine Nelle’s file and try to find a way to trip her up. Since Nelle can be awfully sneaky, Chase’s goal could be tough. In fact, Nelle just might turn the tables at some point. Across town, GH spoilers say Michael (Chad Duell) will spook Nelle by bringing up secrets. He’ll insist that they’re no longer hiding things from each other, but they’re both knee-deep in deception.

At Ferncliff, Carly (Laura Wright) will settle down and display a positive attitude. She’ll decide she has to play Mary Pat’s (Patricia Bethune) game or she’ll never survive this place. Carly will be nothing but calm, which will leave this cautious nurse wondering what’s changed.

It looks like Carly will be allowed into a common area, so that’ll give Jason a chance to check on her. Naturally, it’ll also bring another chance to get caught! The good news is Jason will avoid Mary Pat’s wrath for now. The bad news is Carly will remain stuck with all the crazies. She’ll just have to hang in there until Jason and Michael can figure something out.