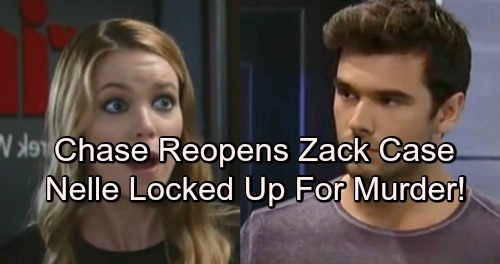 General Hospital (GH) spoilers tease that Harrison Chase (Josh Swickard) could be an integral part of Nelle Benson’s (Chloe Lanier) downfall. An unexpected threat is headed Nelle’s way, so Chase would fit the bill. He could help Carly Corinthos (Laura Wright) get off the hook and make Nelle pay the price for her actions.

Unfortunately, Chase won’t be able to prevent Carly’s stint in a psychiatric facility. It beats prison, but Carly still won’t be happy about getting locked up. On the bright side, Chase could come through for Carly soon enough. His investigation could set off a chain reaction that catches Nelle by surprise.

General Hospital’s offered some great clues about the next phase of this storyline. For starters, Chase has been wrapped up in Corinthos drama from the beginning of his run. He’s been included in most of the Morgan Corinthos (Bryan Craig) “hauntings.” Chase even investigated the aftermath of Nelle’s tumble at the baby shower. His involvement in all this must be important.

Here’s where things get particularly interesting. Chase is always connected to Nelle-related shockers, but he’s never actually seen her. When Chase arrived at the Quartermaine mansion, an injured Nelle was already on her way to the hospital. Later, Dante Falconeri (Dominic Zamprogna) was the one who took Nelle’s statement.

Chase provided another hint during a conversation with his half-brother, Hamilton Finn (Michael Easton). When they first ran into each other in Port Charles, they took a moment to catch up. Chase revealed that he spent some time living in Florida, which is where Nelle lived before her time in Georgia.

Is that a soapy GH coincidence or could that turn out to be a huge revelation? Considering Chase’s line of work, it seems significant. Nelle was accused of killing her ex-fiancé, Zachary Grant, in a suspicious kayaking incident. Zack’s family worked hard to prove Nelle’s guilt, but there just wasn’t enough evidence to put her away.

If Chase was from the same area as Nelle, he must know about the case. After all, Zack’s loved ones were quite pushy. You can bet they were constantly seeking updates and causing a fuss over their pursuit of justice. The Grants probably ran Nelle out of town with all the media coverage. It was a big deal at the time.

Chase may have been part of the high-profile investigation and if so, he most likely remembers the accused kayak killer. He’ll inevitably bump into Nelle sooner or later, which could trigger some memories as well as major suspicions.

Nelle managed to weasel out of murder charges and the drowning was deemed accidental. However, there have been startling new developments. Curtis Ashford (Donnell Turner) did some digging for Michael Corinthos and found out that Nelle was actually an accomplished swimmer. She won several medals at swimming competitions in high school.

Nelle has previously claimed that she wasn’t a strong enough swimmer to save Zack, so she had to go with another explanation when she got caught. She argued that swimming in choppy waters wasn’t the same as a calm pool. That would be reasonable if Nelle hadn’t told lie after lie since she came to town! This girl’s pretty much incapable of telling the truth.

Bobbie Spencer (Jacklyn Zeman) and Felicia Scorpio (Kristina Wagner) also looked into the case, so they’d be thrilled to hear about Chase’s knowledge of it. They would help in any way they could. Curtis and Michael might share what they know as well. Perhaps Chase will even dig around on his own. He just might come up with the ammunition he needs to get the case reopened.

Chase may be the one to expose Nelle’s baby shower lies and ultimately send her prison for killing Zack. Do you think Chase will free Carly and put Nelle behind bars? General Hospital spoilers say the excitement’s about to rev up, so stay tuned. We’ll keep you posted as other GH news comes in. Stick with the ABC soap and don’t forget to check CDL often for the latest General Hospital spoilers, updates and news.