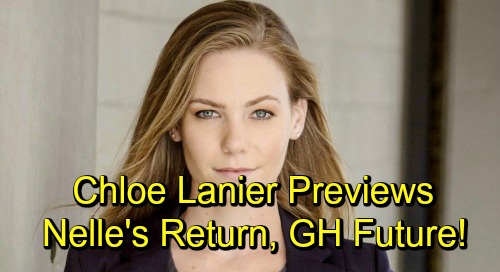 General Hospital (GH) spoilers tease that Nelle’s (Chloe Lanier) comeback will pack a punch. She won’t be around long, but she’ll definitely stir the pot a bit this week. Nelle won’t even have to leave prison to do it! She’ll be in an orange jumpsuit as she meets up with some crucial characters.

In the latest issue of Soap Opera Digest, Chloe Lanier previewed her return to the show. She discussed how it came about and offered some great hints about what’s ahead. It turns out Lanier knew she’d be back before she ever left. That’s undoubtedly why she kept tweeting that it wasn’t the end for Nelle.

Frank Valentini, GH’s executive producer, approached Lanier about her return before she wrapped filming. He suggested they’d need her back to film more scenes in September. Lanier was definitely on board with that plan. “And I got really excited! I had told him, ‘I’m more than happy to recur, I just need more time to do other things’…I’m really happy I got to come back,” Lanier said.

When Lanier got her scripts, she admitted she had trouble getting back in the groove. Lanier knew Nelle quite well after playing her for two years, but two months away left her memory muscles in need of a workout. She had to reread her scenes a few times to get a grip on who Nelle was again.

Fortunately, Lanier put in the work and got the job done. Once she was back on set, it was a piece of cake. “It ended up feeling really nice, really easy,” Lanier said. She also noted that she loved her scene partners, which haven’t been revealed just yet. “I was overjoyed that I got to work with the people that I did,” Lanier gushed.

The actress mentioned that Nelle could be reunited with her child during this visit. She couldn’t confirm it, but she hinted at it strongly. Since Lanier enjoyed working with Parry Shen (Brad), it makes sense that he’ll bring “Wiley” aka Jonah by to see his biological mom.

However, it sounds like Nelle may get a visit from someone else as well. Brad and “Wiley” would technically be “people,” but it’s not like the baby can talk to Nelle. Lanier seemed to suggest that she’d be interacting with more than one person.

Could Carly (Laura Wright) pop in to taunt her enemy? Would Ava (Maura West) dare to drop by? Could Michael (Chad Duell) get curious and seek some answers? There are some interesting options to consider here. General Hospital spoilers say some shockers could hit during Nelle’s “couple of episodes.”

As for the future, Lanier would be thrilled to come back again at some point. “If we can work out the schedule, I’d be 100 percent open to that,” Lanier said. Are you anxious to see Nelle shake things up? We’ll give you updates as other General Hospital news comes in. Stay tuned to ABC’s GH and don’t forget to check CDL often for the latest General Hospital spoilers, updates and news.