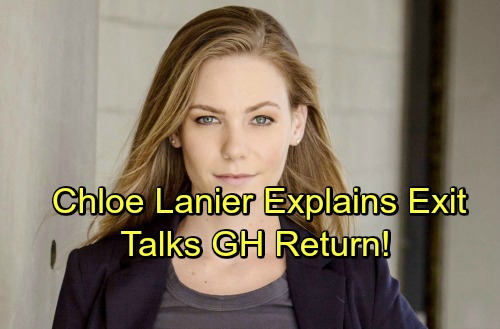 General Hospital spoilers report that GH’s Chloe Lanier, who portrays troublemaker Nelle Benson on the popular ABC soap, recently opened up about her decision to leave the role of Nelle. For two years, Lanier has caused havoc in Port Charles as the devious and mentally unstable Nelle, but her run is about to come to an end as Lanier has decided to leave GH.

In an interview with ABC Soaps In Depth, Lanier explained that her decision to leave General Hospital is about exploring other options. She stated, “Well, it has always been my intention to leave after two years, at the end of my contract…I want to challenge myself in other ways and play other characters and possibly produce my own material. I want to have more time to do that, and working four or five days on a soap, it’s hard to do.”

Lanier will certainly leave on a high note. Nelle’s final scenes are said to be explosive, with some exciting confrontations with her on-screen nemeses. But for Lanier, leaving GH and her costars has been a bit emotional.

In an interview with Soap Opera Digest, Lanier revealed that she did quite a bit of crying after filming her final General Hospital scenes. As Lanier explained, “It’s bittersweet. I’m 100% so happy that I’m taking this next step in my career, but I’ve grown so close to playing this character and to working with people that I love…I know I’m making the right decision, but it’s going to be be emotional.”

And for those who are wondering whether we’ll ever see Lanier return to GH, she admits that it’s a distinct possibility. As Lanier told SOD, “I would love to come back and recur on the show. I think that would be so much fun…So if story permits and I can pop up again, I’d be more than happy to.”

Chloe’s co-workers have nothing but nice things to say about her. Steve Burton, arguably the biggest draw in soaps today, sent Chloe a touching tweet this past weekend, August 5, just before Nelle’s final scenes for this run air.

It certainly sounds like Nelle’s departure will leave the door open for a future return! Stay tuned to the ABC soap and don’t forget to check CDL often for the latest General Hospital spoilers, updates, and news.

Steve, thank you for your sweet words of encouragement! This means so much. Thank you for being so open and remarkable to work with. I hope we get the chance to do it again! 💙 https://t.co/DBud3TyPXe

I moved to LA nearly six years ago with one credit and $200 to my name. I knew two people in all of Los Angeles. Today, I’m grateful to have more love in my life than I ever thought possible. Thank you to all of my friends, fans and loved ones for your overwhelming love and support. I am so excited to share this next chapter with you all. More to come. Xox #thankyou #grateful