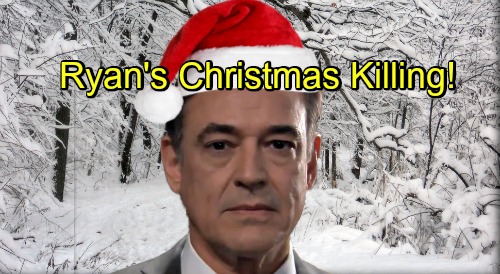 General Hospital (GH) spoilers tease that Ryan (Jon Lindstrom) will make the most of the damage he’s caused. As a coldhearted serial killer, Ryan doesn’t experience normal human emotions. However, he’s usually pretty good at faking it. Since Ryan took over “Kevin’s” life, that naturally helps him out.

People see what they want to see when it comes to “Kevin.” They’re used to Dr. Collins being patient and kind, so many PC residents don’t pay much attention if Ryan ever slips out of the charade. A few like Laura (Genie Franis) know Kevin exceptionally well, which does present a snag from time to time.

Nevertheless, Ryan will believe he’s got everything under control. He’ll think he’s downright untouchable when it comes to getting away with all his crimes. Ryan murdered Mary Pat (Patricia Bethune), who was going to become a real pain if he let her live. That death rocked Port Charles on Halloween.

Next, Ryan murdered Kiki (Hayley Erin) and framed Griffin (Matt Cohen) in an effort to please Ava (Maura West). She said it’d be better if Kiki wasn’t around anymore, so Ryan granted her wish. He’ll remain genuinely surprised by how hard Ava’s taking her daughter’s death. Still, Ryan will roll with it and use it to draw Ava even closer. He’ll be convinced that he can use this to push her over the edge and into full-blown dark mode.

Of course, Kiki’s murder turned Thanksgiving sour. That’s the second time Ryan has killed on a major holiday. Could Christmas be the date of his next murder? It would be a real downer for this traditionally heartfelt time of year, but it’s a real possibility.

The serial killer pattern of holiday homicide fits so far (remember Mary Pat’s (Patricia Bethune) fatal Halloween) and GH could always do it after all the usual Christmas festivities. They could simply reveal the third death the next day. That way General Hospital fans would get the best of both worlds. We can enjoy the special holiday moments and then get some good drama afterward.

Ryan loves pulling off these homicides and confusing the PCPD. He may hope another murder will stop them from getting too close to the truth. Adding a third death with confusing circumstances would only mess with Jordan (Briana Nicole Henry) even further – especially when “Kevin” is consulting on the case. He can lead Jordan down any wrong path he wants.

Who could be next on Ryan’s hit list? Will he kill solely for a story-related reason or perhaps to throw the cops off the trail? We’ll give you updates as other General Hospital news comes in. Stay tuned to ABC’s GH and don’t forget to check CDL often for the latest General Hospital spoilers, updates and news.