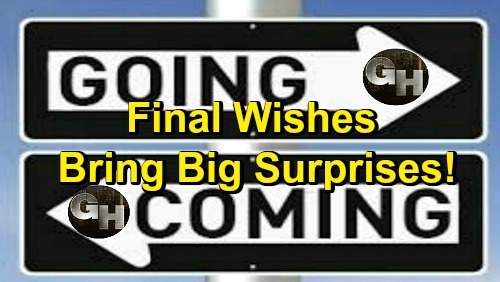 He wants to be remembered as a brilliant murder artist, not just some monster. However, the last straw came through Peyton’s plans. Peyton pointed out that there was no evidence that Ryan was truly dead.

He vowed to raise the possibility of Ryan’s survival at the end of his TV special, so there was only one thing for Ryan to do! Now that Peyton has faced a grim fate, his short stint on General Hospital has come to and end. His murder will only add to the confusion for the already flummoxed PCPD.

We should also discuss some big returns. Brooklyn Rae Silzer recently popped back up as Emma Scorpio-Drake, but another comeback is ahead on new GH episodes this week, January 2-4. It’s been a while since GH fans saw Lucy Coe (Lynn Herring), but she’ll be on screen this week for a somber reason.

After Scott Baldwin (Kin Shriner) learns Gail Baldwin (Susan Brown) has passed away, he’ll grieve for his stepmother. Lucy will support Scott and reflect on some warm memories. General Hospital spoilers say the show will deliver a tribute to Gail and her portrayer, so expect some sweet moments.

Alexis Davis (Nancy Lee Grahn) will eventually share some surprising developments regarding Gail’s will. Something’s included that she never divulged to anyone. It turns out Gail’s final wishes could bring big changes at GH!

In other General Hospital news, we’ve got some info on the actor playing “Hank.” That’s the guy who claims to know Drew Cain (Billy Miller) from their time together in Afghanistan. Many GH viewers thought the actor looked familiar.

If you’re a fan of The Young and the Restless as well, that’s where you’ve seen Coby Ryan McLaughlin before. He played a brief, crucial role over there not too long ago.

Perhaps McLaughlin will be equally important in his new GH role. Hank is linked to more than just Drew, so he’s definitely got some secrets left to expose.