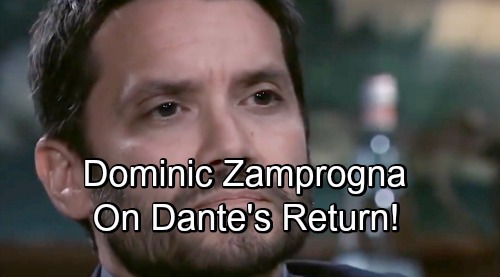 General Hospital (GH) spoilers reveal that we’ve got some comings and goings news to pass along. For starters, let’s talk about that upcoming Sonny (Maurice Benard) special. GH fans have been watching Sonny take charge of Port Charles for quite some time. The show decided to honor Benard’s 25th anniversary with General Hospital, which is why we’re getting a Sonny-centric episode.

Two exciting guest stars will be part of the Sonny festivities. Benard’s real-life son happens to be interested in acting, so this was the perfect opportunity to get him involved at GH. Joshua Benard will portray a teenage Sonny in some faux flashback scenes. We’ll see what would’ve played out if Sonny had chosen a normal life instead of joining the criminal underworld.

Of course, the second big guest star is Dominic Zamprogna. He’ll step back into the role of Dante, but don’t expect the usual portrayal. In Sonny’s crazy dream, Dante will be working for Julian (William deVry) and Ava (Maura West). He’ll be in “PR,” but his real job will tie in with major mob drama.

Dante will even be married to Sam (Kelly Monaco), so poor Jason (Steve Burton) can’t get even get the woman he wants in a dream. That’s a nightmare! In an interview with Soap Opera Digest, Zamprogna talked about how much this one-day return stint meant to him. “I was super-touched that the show came to me and wanted me to be a part of this thing for Maurice,” Zamprogna said.

Zamprogna also addressed his future with General Hospital. Could a lengthier comeback be on the horizon? Sadly, Zamprogna doesn’t have that in mind at the moment. He admitted, “I hope that the fans are excited and not just disappointed that it’s just one episode for now. I don’t want to mislead people by saying ‘I’m back.’ But I’m looking forward to it, for sure.”

Many GH viewers are looking forward to it, too! It’s a bummer that we can’t have Dante around longer, but he did say “for now.” Never say never on a permanent return for Dante. You just never know what might happen down the road.

In other news, Kimberly McCullough (Robin) recently directed an episode of ABC’s The Connors. She’s a fantastic actress AND director, so she’s clearly a woman of many talents. Let’s hope McCullough can still squeeze a Robin comeback sooner or later. GH viewers miss her if she stays away too long!