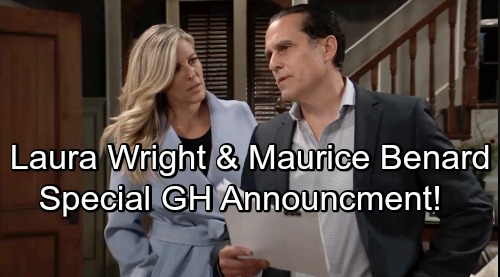 General Hospital (GH) spoilers tease that something big is coming on Monday, November 12. Yes, that’s the day of the special Sonny-centric episode in which Sonny envisions what his life would have been like had he never forged a life of crime. But according to a new video teaser, something else is going to happen during Monday’s episode.

In the teaser, Laura Wright and Maurice Benard chat on the GH set. Laura walks up and says, “Maurice, what are you still doing here? You have a big day tomorrow.” Maurice replies, “I know, but everybody’s talking about the special episode, but that’s not all that’s happening.”

Laura then playfully says, “Oh, don’t say another word. CarSon fans have been waiting 20 years for this. A few more hours won’t kill them.” Maurice then looks at the camera and says, “You heard her” as they smile knowingly.

Finally, a voice-over announces, “Don’t miss this special announcement inside General Hospital tomorrow on ABC.” So, what could the special announcement be? Could it be a special Carly and Sonny video retrospective that will be posted on abc.com? Or will something else be revealed about the fan favorite duo? Fans will have to wait to see.

No matter what the surprise is, viewers are in for a real treat on Monday. We’ve got the special Sonny “what if” episode, plus a surprise announcement to look forward to!

Are you excited for Monday’s special episode? Stay tuned to the ABC soap and don’t forget to check CDL often for the latest General Hospital spoilers, updates, and news.