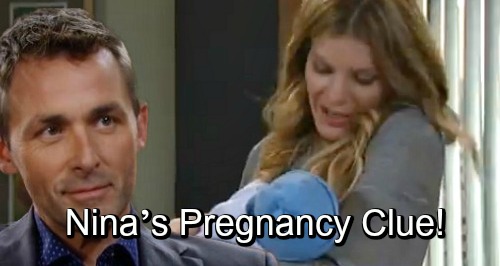 General Hospital (GH) spoilers tease that more heartache is headed Nina’s (Michelle Stafford) way. For the first time in a long time, Nina’s feeling content. She loves being part of Charlotte’s (Scarlett Fernandez) life, but she’s always longed for a child of her own.

Now Nina has one – or so she thinks. Too bad Valentin’s (James Patrick Stuart) risky plot is going to blow up in his face! There’s no way he’ll be able to keep a lid on the Sasha (Sofia Mattsson) scheme indefinitely. When the truth comes out, Nina’s going to be devastated. Not only will she lose her newfound daughter, she’ll lose her last glimmer of faith in Valentin and their future together.

Of course, the other half of that heart pendant is still out there. Nina’s real daughter could certainly turn up. Kiki (Hayley Erin) and Willow (Katelyn MacMullen) have been tossed around as possibilities, but neither option is a great one. It looks like Kiki may face a grim fate thanks to Ryan. As for Willow, she’s awfully dull. Willow doesn’t seem like the kind of character who’ll stick around for years and years.

There have been more hints about Kiki being the daughter in question, so what happens if that’s true? Where does that leave Nina? Potentially back where she started! Nina may have to grieve the daughter she never knew and feel that void once again. However, GH may have just offered a clue about her future. It involved an admission during a chat with Franco (Roger Howarth).

After Franco was brought up to speed on Sasha, he wondered if Nina was OK with her child being all grown up. Nina suggested she was, but her response was a bit somber. Franco tried to cheer her up by noting that she missed all the “poopy years,” but Nina admitted she would’ve liked those. Perhaps General Hospital was hinting that she’ll still get a chance after all.

James Patrick Stuart and Michelle Stafford seem to enjoy working together. Valentin and Nina have a way of overcoming just about anything, but what about a lie as huge as this? How can Valentin overcome deceiving Nina about the one thing she cares about most? Maybe a miracle baby will be what fixes their broken bond.

If General Hospital isn’t going to give Nina a proper adult daughter, giving her a new baby is the right thing to do. Nina’s been longing for one, so why not go for it? There’s no reason GH can’t take this route and finally give Nina some happiness.

Some fans will note that according to GH history Nina isn’t supposed to be able to bear more children – but since TPTB at GH have been rewriting their own rewrites lately, rendering history rather fluid, we can’t rule out a new Nina baby.

Do you think all this is building to Nina’s surprise pregnancy? We’ll give you updates as other GH news comes in. Stay tuned to the ABC soap and don’t forget to check CDL often for the latest General Hospital spoilers, updates and news.