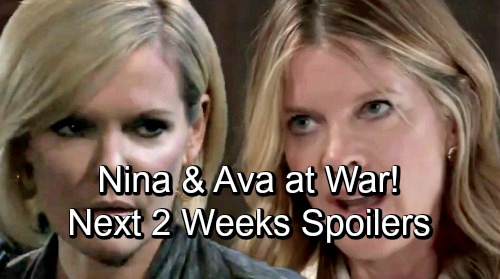 General Hospital (GH) spoilers for the next two weeks tease that some startling developments are on the way. During the week of November 12-16, Liz (Rebecca Herbst) will get some crushing news. It looks like it’ll be about Aiden (Jason David) and his mysterious issues. Liz can’t get the kid to open up, but she’s struggling to handle this mama drama. She’ll finally decide to step up her efforts soon enough.

Meanwhile, Curtis (Donnell Turner) will be touched by a thoughtful gesture. Drew’s (Billy Miller) actions will prove that he’s a loyal friend, so we should see some sweet moments for these buddies. Over with Ava (Maura West), she’ll happily throw back some drinks with “Kevin.” Of course, she won’t realize she’s actually guzzling with and chatting up Ryan (Jon Lindstrom).

The fake Dr. Collins told Ava he was too fascinated by her and just couldn’t be objective. He put an end to their sessions, but not their growing bond. Ava will get even closer to Ryan in the week ahead. Next, Olivia (Lisa LoCicero) will get awfully aggressive. It sounds like someone will leave her fed up and ready to explode!

During the week of November 19-23, General Hospital spoilers say Monica (Leslie Charleson) will hang out with Oscar (Garren Stitt). She’ll fear the teen may not have much time left, so it’s important to savor whatever she can get. Elsewhere, Drew will put up walls with Kim (Tamara Braun). Their Oscar issues will take a toll, so expect conflict and distance between them.

Across town, Spinelli (Bradford Anderson) will pitch in for Carly’s (Laura Wright) sake. She’s a person of interest in Mary Pat’s (Patricia Bethune) murder investigation, but Jordan (Briana Nicole Henry) and Chase (Josh Swickard) don’t really think she’s guilty. However, they know someone’s going to a great deal of trouble to make it look that way.

If more evidence mounts against Carly, the cops could change their tune. That may be why Carly relies on Spinelli. Then again, it could just be curiosity and a desire to solve the Ferncliff mystery. Whatever the case, Carly will count on Spinelli to come through for her.

Other GH spoilers say a major fight will break out. Nina (Michelle Stafford) and Ava will go to war, so Sasha (Sofia Mattsson) may be the reason why. As Kiki (Hayley Erin) grows more suspicious of Sasha’s interest in Griffin (Matt Cohen), Nina may believe Ava’s still stirring the pot.

General Hospital fans can also expect a special visit between Jason (Steve Burton) and Sam (Kelly Monaco). Will these two take another step forward? We’ll give you updates as other GH details emerge. Stick with the ABC soap and don’t forget to check CDL often for the latest General Hospital spoilers, updates and news.