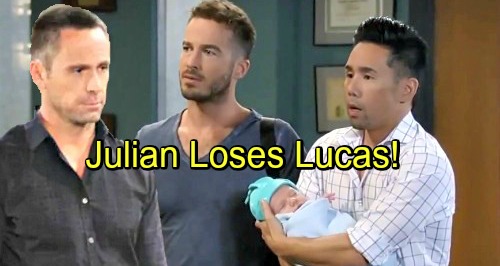 General Hospital (GH) spoilers tease that Julian’s (William deVry) actions may come back to bite him. Brad (Parry Shen) put Julian in a terrible situation when he confessed to the baby swap. It’s forced Julian to keep secrets from Lucas (Ryan Carnes) and manipulate everything behind the scenes.

Julian is still doing whatever he can to calm Brad down and keep the “Brucas” family intact. His heart is certainly in the right place. Julian just doesn’t want to see Lucas in pain. He’s willing to do just about anything to avoid drama, but he may end up causing more of it.

General Hospital fans know how it goes with soap secrets. Sooner or later, the truth has to come out. When it does, there’s always going to be explosive fallout for everyone involved. Once Brad’s scheme inevitably blows up, you can bet Julian’s part in it will be exposed, too. That could create a huge setback in Lucas and Julian’s relationship.

Due to the birth mom agreement, Lucas isn’t willing to let Julian get too close to “Wiley.” However, he relented on forming a bond with Julian himself. Lucas suggested that maybe he had some room in his life, so he’s giving Julian a shot. This gift is something Julian won’t take for granted.

Too bad Julian may lose his chance down the road. After the baby switch is revealed, Lucas is going to feel betrayed by Brad and Julian. GH spoilers say he may turn against them both. Of course, there’s one crucial fact that could help Julian salvage things a bit. Brad didn’t tell him the whole story!

Julian thinks Brad took some random lady’s baby on the side of the road. Brad claimed the woman couldn’t take care of the child herself, so Julian doesn’t see the harm here. In his mind, Lucas and Brad are just caring for a kid that needed a home.

If Julian knew about Nelle’s (Chloe Lanier) involvement, would he have made the same choice? Would Julian have kept his mouth shut and let Michael (Chad Duell) suffer? It’s tough to say. Regardless, Julian can argue that it would’ve changed the game. He may assure Lucas that he would’ve come clean if he’d known everything.