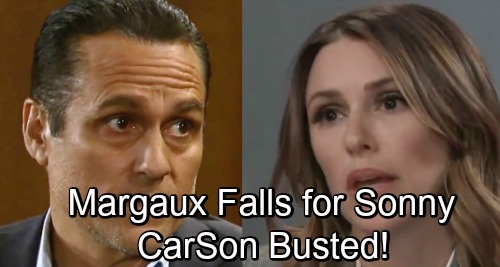 General Hospital (GH) spoilers tease that Sonny (Maurice Benard) could be moving into dangerous territory, but not in the way you might think. Ever since Margaux (Elizabeth Hendrickson) arrived in town, she’s been on a mission to bring Sonny down. Since that task hasn’t been easy, Margaux went after Carly (Laura Wright) with full force. That was a piece of cake thanks to Nelle’s (Chloe Lanier) lies.

However, the remains discovered at Charlie’s Pub changed the game. Now Margaux’s stuck on Sonny again, but their relationship seems to be shifting. That trend may continue thanks to the ordeal Margaux just went through. Their shared experience will spark a new path for Sonny as well.

After Margaux joined forces with Sonny and learned the truth about Jeanette’s (Ely Pouget) actions, it felt like something broke inside her. The once fierce DA was a drunk, blubbering mess on the floor. Almost anyone would feel sympathy for Margaux in this situation. Sonny was clearly affected by Margaux’s heartbreaking reaction, so that should influence the story moving forward.

GH fans saw a tender moment as Sonny made sure Margaux was covered up on the sofa. On Monday, General Hospital spoilers say Sonny will dream of the past. He’ll consider how different his life would’ve been if he hadn’t killed Vincent – or anyone else for that matter.

When Sonny awakens, he’ll recall his dream and take steps to make things right. There’s no bringing back Vincent, but maybe Sonny can try a gentler tactic with Margaux. He’ll need time to mull over a big decision like this, but a confession could be coming.

On November 15, General Hospital spoilers say Sonny will track Margaux down again. The next day, he’ll make a passionate plea. Will Sonny admit his wrongdoing and beg for mercy? He might see that for Margaux to have closure, he needs to own up to his crime and acknowledge that it shaped her entire life. Jeanette pushed for this and Scully ordered the hit, but Sonny pulled the trigger.

Sonny may ask Margaux to excuse the ruthless behavior of an impressionable kid. It’s true that he’s done far worse since then, but it all traces back to his younger years. If he hadn’t started down that dark road, everything would’ve been different.

Sonny might ask Margaux to consider what’s at stake for his loved ones. Due to recent revelations, she mentioned that her family was completely destroyed. Sonny may plead with Margaux and hope she doesn’t do the same thing to his.

Will Margaux and Sonny reach an understanding? General Hospital spoilers hint that Margaux could soften toward the mob boss. Could she fall for him, too? Is an affair like Jeanette and Scully’s brewing?

GH always has to blow up “CarSon” from time to time, so Margaux would be an interesting, complicated option. If Sonny has a fight with Carly and cheats with Margaux, it’d bring loads of drama! We’ll give you updates as other news comes in. Stay tuned to the ABC soap and don’t forget to check CDL often for the latest General Hospital spoilers, updates and news.