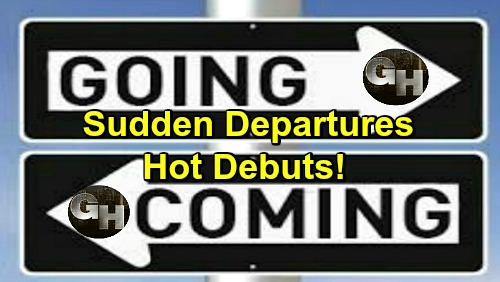 General Hospital (GH) spoilers reveal that we’ve got some comings and goings news to pass along. First, let’s talk about a couple of departures. Sasha (Sofia Mattsson) recently shared an emotional goodbye with her fake birth mom. She pushed Nina (Michelle Stafford) to reunite with Valentin before bidding her farewell and leaving town.

Of course, GH isn’t done with Sasha just yet. She’ll be out of the picture for a while, but she’ll be back eventually. General Hospital spoilers say Valentin’s (James Patrick Stuart) plot will be exposed sooner or later, so Sasha will have to be around for that. She’ll inevitably get grilled and caught in the shocking aftermath.

Kelly Thiebaud also wrapped up her latest run as Britt, which left some GH fans disappointed. General Hospital didn’t give her a real exit. Instead, they just had Britt leave a note behind explaining everything to Liesl (Kathleen Gati). The decision cheated viewers a bit – especially the ones who love Britt and expected more from her return arc.

On the bright side, Britt could always come back down the road. In an interview with Soap Opera Digest, Thiebaud assured everyone she’d be on board with that plan. When asked about reprising the role of Britt again, Thiebaud insisted she’d “absolutely” be in. GH just has to make the call! “I always have a great time there,” Thiebaud said.

Other General Hospital spoilers say Nick Alvarez will pop up as Cole this week. He’ll be a drug-dealing troublemaker that Cameron (William Lipton) turns to for help. It looks like Cole will hook Cam up with some weed for Oscar (Garren Stitt). The sick teen doesn’t have much of an appetite, so Cameron’s hoping this might help.

Cam called off the deal in Friday’s episode, December 14, but Cole may reel him back in. General Hospital fans can expect Cameron to end up at the police station later, so things must head south quickly. We should also mention that John Patrick Jordan has been cast as Peyton Mills. Perhaps he’ll be the mysterious stranger who seeks out Drew (Billy Miller) during the week of December 24-28.