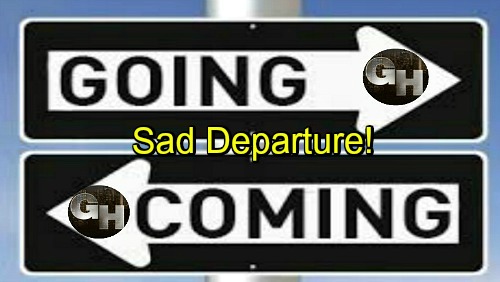 General Hospital (GH) spoilers reveal that we’ve got some comings and goings news to pass along. For starters, there’s a sad departure. Brooklyn Silzer recently popped up for a return stint as Emma, but she’s already off canvas again. It’s always a bummer when Emma has to go!

On the bright side, GH fans were treated to some fun family scenes with Emma and her grandparents. It was great to see Emma, Robert (Tristan Rogers) and Anna (Finola Hughes) in action. Emma’s a real spy in the making, so it seems she’s learning from the best.

We should also remind you about a casting switch that’s coming up during May sweeps. Leslie Charleson was injured thanks to a mishap with her dog, so General Hospital had to temporarily recast the part of Monica. Patty McCormack was quickly announced as Charleson’s replacement. You can expect to see her spin on Monica around mid-May.

Other General Hospital spoilers say the Nurses Ball has found its red-carpet host. Nick Viall is a former Bachelor star and now he’s ready to interview some stunning GH guests. He’ll be on hand to chat with everyone as they make their way in for the shindig.

There was recently a bit of confusion on social media, so we’ll go ahead and clear things up for you. A few websites featured hazy headlines, which led to a misunderstanding about Lucy’s (Lynn Herring) role in the festivities. Just to confirm, Viall won’t be stealing the spotlight. He’ll stick to the red-carpet fun, so Lucy will be mistress of ceremonies as usual.

Colleen Sullivan also has a new role on General Hospital. This reporter and anchor works at ABC7 Eyewitness News in Los Angeles, but she’ll do a little acting for all the Nurses Ball drama. This big event will air during the week of May 16-21, so it won’t be long now! GH viewers won’t want to miss all the excitement.

That’s it for comings and goings news. We’ll give you updates as other GH details emerge. Stay tuned to the ABC soap and don’t forget to check CDL often for the General Hospital spoilers, updates and news.