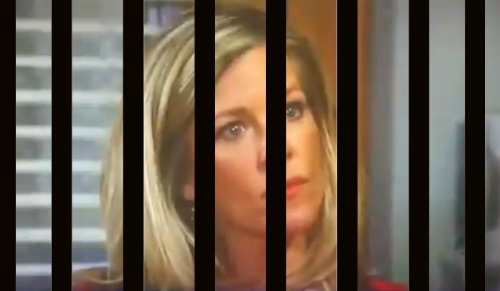 General Hospital (GH) spoilers tease that Carly (Laura Wright) will struggle with more reminders of Morgan (Bryan Craig). Nelle (Chloe Lanier) has a real doozy of an illusion planned, so she may make Carly believe her dead son’s right in front of her. It wouldn’t be too hard with a lookalike, especially if he’s standing in the dark somewhere.

Of course, Carly’s also going on anti-anxiety meds. Kevin (Jon Lindstrom) suggested they could cause hallucinations, so that’ll fit right in with Nelle’s plot. If Nelle’s tricks can’t push her enemy over the edge, Carly’s own mind could do the job for her. It’s clear that Carly is inching toward her breaking point.

Since it looks like Sonny (Maurice Benard) will lose custody of Avery (Ava and Grace Scarola), guilt will also be a factor for Carly. She’ll feel like she made Sonny and Mike’s (Max Gail) problems even worse. If Carly hadn’t been off sniffing cologne in the cemetery, she would’ve been where she was supposed to be and the nanny wouldn’t have goofed.

All of Carly’s issues will build until they become too much to handle. She could be headed for another nervous breakdown, especially after Nelle’s grand finale. A Morgan sighting would probably be more than Carly could bear. General Hospital spoilers say Carly will find herself in a mental institution soon enough.

Where will this GH story go from there? Carly’s been a mess lately, so nothing’s making any sense to her. If Carly’s committed, she’ll have plenty of time to mull this over and solve the mystery. Carly could ponder everything that’s happened and have a sudden realization. Will it finally hit her that Nelle’s to blame?

That would certainly bring major drama. Carly could have trouble finding a way out of her predicament. She’d undoubtedly beg people to believe she was set up. Nelle has covered her tracks and Carly will be in an incredibly fragile state. Will anyone buy Carly’s seemingly crazy claims?