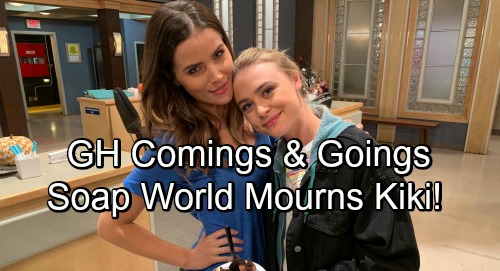 General Hospital (GH) spoilers reveal that we’ve got some comings and goings news to pass along. First, let’s talk about an exit that had the soap world buzzing. No matter how many times we all heard about Kiki’s (Hayley Erin) grim fate, it was tough to truly prepare for her to bite the dust.

By the time Ryan (Jon Lindstrom) finally did the deed, General Hospital fans were glued to their screens and in need of tissues boxes. Of course, Maura West delivered some powerful work as Ava reacted to the heartbreaking demise. It’s safe to say most GH viewers won’t be forgetting that episode anytime soon! West has already made herself a serious Daytime Emmy contender with that material.

As for Kiki, the loss hit harder than some General Hospital watchers expected. Kiki was warm and caring character, so that made losing her to a brutal murder awfully tough. On the bright side, Erin’s exiting to pursue other projects – like The Perfectionists, Freeform’s new Pretty Little Liars spinoff. She’ll be missed at GH, but she’ll undoubtedly go on to entertain in primetime and that’s great news.

Erin had one last message to General Hospital fans after her final scenes aired. She’s certainly grateful for what this role brought to her life and for the viewers that made it possible. Erin delivered her parting words on Twitter and added a photo from her last day on set.

“RIP Keeks,” Erin tweeted. “Much love to my @GeneralHospital family, I’ll miss you guys. Thank you for this wonderful, wild ride in daytime. I’ll always be grateful to the fans who embraced Kiki through the years, my life wouldn’t be nearly this beautiful without your constant love and support XO.”

That’s it for comings and goings. We’ll give you updates as other GH details emerge. Stick with the ABC soap and don’t forget to check CDL often for the latest General Hospital spoilers, updates and news.