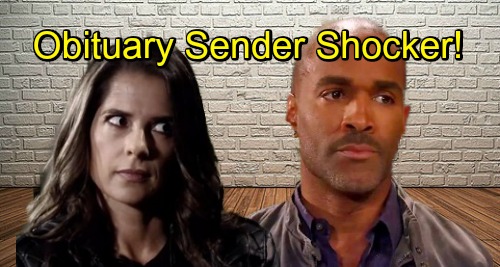 General Hospital (GH) spoilers tease that Sam (Kelly Monaco) and Curtis (Donnell Turner) will be hot on the trail. GH fans know Sam recently received a cryptic delivery. An envelope with no return address had Leland Powell’s obituary inside. Sam told Alexis (Nancy Lee Grahn) this man was her husband, so General Hospital’s got a new mystery underway.

The first order of business is finding out who sent this envelope. To do that, Sam will need some backup. She’s obviously got solid skills when it comes to investigating, but two heads are better than one. Curtis has proven to be a valuable partner for Sam and she always steps up for him, too. They make a great team, so they’ll join forces for Sam’s latest conundrum.

It won’t be long until Sam and Curtis find their first clue. General Hospital spoilers say they’ll dig deep and uncover something that could point them in the right direction. The newspaper this obituary came from will be important here. Curtis and Sam will determine that someone in Port Charles subscribes to that newspaper. They’ll want to track this mystery man or woman down and get answers.

Is the person who holds this subscription somebody we already know? If so, that could certainly make things interesting. It’d probably have to be someone who’s been around for a while. He or she clearly knows Sam’s history, so it would make more sense with a long-term character.

However, it seems just as likely that GH will invent a new character for this story. In that case, it could certainly be someone new to Port Charles. Perhaps this person came to town with the intention of targeting Sam. He or she could at least have passed along the newspaper to someone else. It might’ve been an innocent handoff to a not-so-innocent party.

Regardless, Sam will be determined to find out all she can. The deeper she dives, the more concerned she’ll get. Sam will probably get another message or two along the way. They could turn threatening as this hot plot gets even hotter. General Hospital spoilers say Sam will battle anxiety on December 17. Thankfully, Jason (Steve Burton) will be there to offer loads of love and reassurance.

Who do you think the mysterious obituary sender is? Will it be the person who subscribes in PC? Will he or she be a stepping stone to a much bigger villain? We’ll give you updates as other GH news comes in. Stay tuned to the ABC soap and don’t forget to check CDL often for the latest General Hospital spoilers, updates and news.