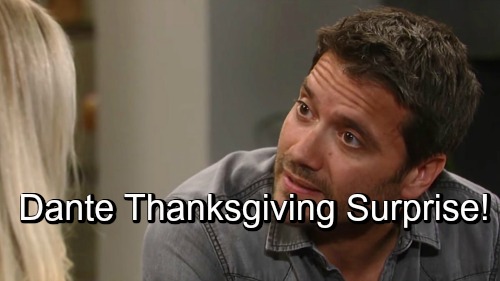 General Hospital (GH) spoilers tease that Dante Falconeri (Dominic Zamprogna) is headed back to the ABC soap for a very special episode. He was on set to film on October 30, so his upcoming scenes will air toward the end of November. The timing would be right for a fun-filled, family holiday. Dante just might make it home for Thanksgiving!

In an interview with Soap Opera Digest, Zamprogna offered a taste of what to expect. He said, “I’m excited. I was super-touched that the show came to me and wanted me to be a part of this. I think people are going to like it a lot.” It certainly sounds like Dante could get some warm moments with his loved ones.

This could play out in a couple different ways. If Lulu Falconeri (Emme Rylan) hosts her own Thanksgiving gathering at home, Dante might show up unexpectedly at the door. He might even bring some early Christmas gifts for Lulu and the kids. This may be the last chance he has to see them before Santa comes to town.

GH viewers know Lulu’s been missing her man, so she’d be thrilled to see Dante at their doorstep. They could enjoy a happy reunion and a wonderful dinner together. Dante would have to rush off again later, but at least this could keep hope alive for their marriage.

However, there’s another route GH could take. General Hospital spoilers say Monica Quartermaine (Leslie Charleson) will host the annual Quartermaine Thanksgiving. She’ll serve up some gourmet pizza and count on lots of love in her home. Since Ned (Wally Kurth) and Olivia (Lisa LoCicero) are part of that group, they may invite Lulu and her family to join in.

Dante might show up at the Quartermaine mansion and give everyone a holiday shock. Dante only had an offscreen goodbye with his mom, so GH fans deserve better. Let’s hope we’ll see some sweet scenes between Olivia and Dante before he heads out again.