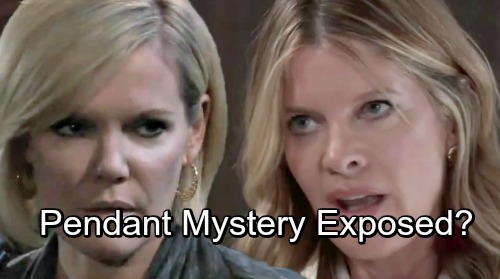 General Hospital (GH) spoilers tease that Nina (Michelle Stafford) will prepare for battle. She wasn’t around to raise Sasha (Sofia Mattsson), so Nina will be feeling extra protective. In addition to making up for lost time, Nina will want to watch out for Sasha’s well-being in Port Charles. There are always some shady characters hanging around town – and one of them’s Ava Jerome (Maura West)!

Thanks to Sasha and Kiki’s (Hayley Erin) link, Ava has taken an interest in Nina’s long-lost daughter. She met with Sasha recently to subtly trash talk Kiki and argue that they’d work it out sooner or later. Of course, that was clearly a lie. Ava has no intention of making amends with Kiki. She just wanted to nudge Sasha toward Griffin (Matt Cohen) by suggesting he’d get bored with Jerome number two.

Ava will probably reach out again in the near future. She’ll want to keep planting ideas in Sasha’s head and hopefully spark a hookup with Griffin. However, Sasha may sense that Ava’s trouble. Now that she’s moving in with Kiki, she’ll be particularly concerned about Ava’s apparent game. Sasha won’t want to make waves with her new sis, so she’ll confide in Nina.

That’s when Nina will go all “Mama Bear” and vow to handle this. General Hospital spoilers hint that Nina will confront Ava eventually. She’ll have a big problem with Ava poking her nose where it doesn’t belong. Nina may argue that if Ava wants to destroy her own mother-daughter bond, that’s fine. If she does anything to jeopardize Nina’s bond with Sasha, that’s another story entirely.

GH is finding ways to keep Ava and Nina’s plots intertwined, so we have to ask ourselves why. What’s so important about having these two interact over their daughters? It seems likely that we’re building to a major twist. Ava didn’t seem all that impressed by Nina’s newly discovered child. Part of that could just be Ava being Ava, but there could be more to it than that.

Perhaps Kiki is Nina’s real daughter and Ava’s keeping that news to herself. We can’t forget about that time Nina scolded Ava for alienating Kiki. She suggested that she’d cherish every moment if Kiki were her daughter. Plus, the process of finding Sasha was far too simple. General Hospital has to be building to a bombshell.

Sasha seemingly doesn’t have the half-heart pendant, which is crucial. That jewelry has to turn up at some point. Does Kiki have it and not even realize it? Does Ava have it tucked away instead? GH has some interesting angles to explore.

General Hospital spoilers say Nina, Sasha, Ava and Kiki will all remain on a collision course. They’re inching closer to something huge, so it could be the reveal of Kiki as Nina’s kid. We’ll give you updates as other GH details emerge. Stay tuned to the ABC soap and don’t forget to check CDL often for the latest General Hospital spoilers, updates and news.