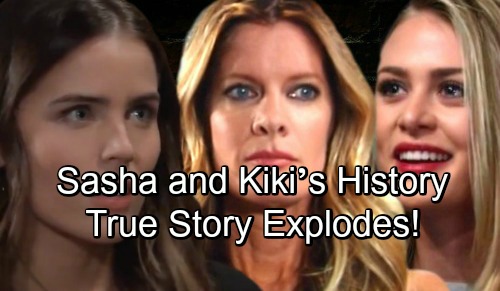 General Hospital (GH) spoilers reveal that Kiki Jerome’s (Hayley Erin) family just gained a member. She recently met her long-lost sibling, Sasha Gilmore (Sofia Mattsson), and even referred to her as her “big sister.” Of course, that may have caused some confusion for GH viewers. Let’s talk about this strange situation and how it might affect the plot moving forward.

Usually when someone has a big sister, it’s one who’s at least a couple years older. The age gap is often much wider as we see with Kiki and Avery (Ava and Grace Scarola). Nobody questions why Kiki calls Avery her little sis, but the Sasha big sis comment is a bit of a headscratcher. Why? Sasha is technically the oldest according to GH history, but not by much. They’re only about three months apart!

Various soap sites and references in the show itself list an original birth year of 1992, but that was later revised to 1993. Why GH made them a year younger is a mystery. It didn’t seem to affect the stories in any way.

However, Kiki and Sasha’s mutual birth year reveals their late father really got around. Silas Clay (Michael Easton) was involved with Kiki’s mother, Ava Jerome (Maura West), when Sasha’s mom was only three months pregnant and stuck in a coma. Poor Nina was suffering while Silas was off hooking up.

If Sasha is indeed Silas and Nina’s kid as GH claims, perhaps she inherited the unfortunate parts of them. That’d be the typical soap luck, right? Nina’s crazy side could come shining through, especially since a hint was dropped during that chat with Maxie (Kirsten Storms). Maybe Sasha’s not exactly fine upstairs as she suggested!

Sasha may also have the same wandering eye as Silas. She was certainly checking out Griffin Munro (Roger Howarth) when he walked away. Ava even planted the idea that Griffin would get bored with Kiki. She argued that he was only looking for something casual, which is probably what Sasha has in mind, too.

Then again, General Hospital could take this in the opposite direction. Despite any traits Sasha might share with her parents, GH could ultimately disprove her as Nina’s daughter. Perhaps that’d be a reason for the three-month age difference to come into play. It might lead to the discovery of some discrepancy in the timeline and spark the big revelation.

Valentin Cassadine (James Patrick Stuart) should hurry up and get Sasha’s paternal DNA tested to be absolutely sure. It’s on file at GH since Silas tested Kiki’s DNA against his own. If Sasha isn’t the daughter Nina’s seeking, maybe Kiki is. Her maternal DNA still needs to be tested, too. That’s especially true since Kiki may become Ryan Chamberlain’s (Jon Lindstrom) murder victim soon.

Time is running out! General Hospital spoilers say the show will kick the shockers in high gear now that Kiki and Sasha have met. Their relationship will add some intriguing layers to this storyline, so stay tuned. We’ll give you updates as other GH news comes in. Stick with the ABC soap and don’t forget to check CDL often for the latest General Hospital spoilers, updates and news.