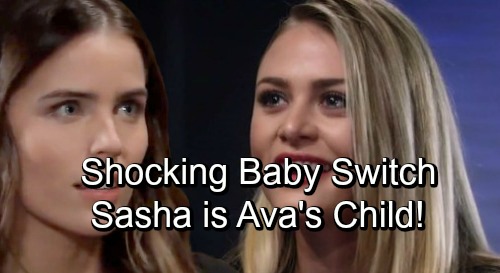 General Hospital (GH) spoilers tease that a big twist may be coming in Nina Reeves’ (Michelle Stafford) daughter storyline. GH fans will recall that Curtis Ashford (Donnell Turner) followed a money trail, which indicated that Nina’s child was adopted by a single mother. However, there could be another explanation. This description could easily fit Kiki (Hayley Erin) and Ava Jerome (Maura West).

Even though the DNA tests between Nina and Sasha Gilmore were a match, someone could’ve paid for them to come out that way. Valentin Cassadine (James Patrick Stuart) would certainly have a motive. He’d do pretty much anything to make Nina happy and secure a shot at a reunion with her. Desperation could’ve driven Valentin to cook up some DNA evidence for Nina’s sake as well as his own.

Many General Hospital viewers feel like daughter revelation was far too easy. Since this is a soap, there has to be a catch. With that in mind, let’s consider a shocker that would totally change the game. GH fans have always suspected something was off about Ava and Kiki’s relationship. There’s a chance the clues will finally add up at the end of this storyline.

When Ava was pregnant with Avery (Ava and Grace Scarola), she was spotted reading What to Expect When You’re Expecting. That’s a book for first-time mothers, which didn’t make much sense for Ava. Kiki was already in her early 20s at that point, so Ava should’ve known exactly what to expect. It’s possible Ava was just giving herself some reminders, but it may have also been a puzzle piece.

We can reasonably confirm that Kiki’s father was truly Silas Clay (Michael Easton). He had his doubts about Ava having Franco Baldwin’s (Roger Howarth) baby, so he did a DNA test himself. It proved Silas was Kiki’s father. The DNA samples and the test results may still be on file at GH.

No one ever tested Kiki’s DNA against Ava. Since she had the bone marrow transplant from Avery, a current DNA test might deliver slightly off results anyway. Still, it’s important to note that Silas used Avery’s bone marrow because Kiki wasn’t a match. Could that be another hint that Ava isn’t Kiki’s birth mother?

Since Silas wanted a DNA test, Ava had to be fooling around with both Franco and Silas at the same time. Ava later claimed she made up the Daddy Franco story because back then, he was thought to be Jason Morgan’s (Steve Burton) long-lost twin. She argued that she wanted access to all that Quartermaine money.

Of course, Franco had been told he was Kiki’s father since she was born. That was long before Ava had any inkling about the Quartermaines and their great wealth. Things just don’t quite add up, so maybe there’s been some deception going on.

If Kiki is really Nina and Silas’ kid, what happened to the one Ava gave birth to? Silas apparently knew Ava’s pregnancy was real and Franco probably did, too. Enter the baby switch queen and Franco’s mom, Heather Webber (Robin Mattson)! She was missing from the GH canvas between 1980 and 2003. Heather also had ties to New York City, where Silas, Nina and Madeline Reeves (Donna Mills) lived.

Franco, who didn’t know Heather was his real mother, was in New York at that time. The same goes for Ava. Heather always knew Franco was her son, even though she didn’t care about raising him. Could she have taken interest in a granddaughter with a profitable goal in mind?

After Madeline brokered Nina’s baby for illegal adoption, she may have taken one last step to prevent exposure. Madeline was determined to keep Silas away from his daughter, so she might’ve paid Heather to switch the two baby girls. Naturally, we’re talking about Franco and Ava’s along with Silas and Nina’s.

Perhaps Heather worked with the illegal broker and that’s where the connection was made. Madeline probably never had a clue Heather was Franco’s real mother, let alone knew Franco! This could also explain why Heather was so against Franco getting together with Nina – and why she obviously knew Nina when Nina didn’t know her.

Will the twist in this storyline be that Sasha is really Ava and Franco’s child? Does Kiki belong to Nina and Silas? General Hospital spoilers say some chaos is looming, so stay tuned for all the shakeups. We’ll give you updates as other GH news comes in. Stick with the ABC soap and don’t forget to check CDL often for the latest General Hospital spoilers, updates and news.