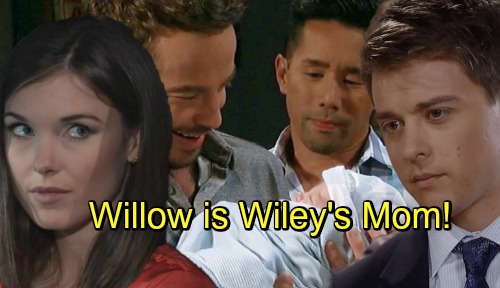 General Hospital (GH) spoilers reveal that some shocking Willow (Katelyn MacMullen) clues are emerging. Soap Opera Digest called Willow a “pivotal character,” so she’ll be a vital part of the November sweeps drama. Willow has already interacted with several characters, but she’ll end up interacting with even more before long.

However, Willow’s latest actions also raise an interesting possibility. She was “taking a moment” in her illegally parked car when Chase (Josh Swickard) confronted her. Lulu (Emme Rylan) eventually wandered over and pointed out that she was Charlotte’s (Scarlett Fernandez) teacher. She pushed Chase to consider dating Willow. These connections will be important as time goes on.

Willow lied about her reason for visiting GH, but Chase spotted the bereavement flyer in her car. What does that tell us? 1) It indicates that Willow is grieving for someone she lost. 2) It suggests that she isn’t keen on talking about it. If Willow lost somebody like her mother or a close friend, perhaps she wouldn’t be so secretive. Willow’s loss may involve some misplaced shame instead.

Of course, Michael entered the group meeting just after Willow. That pretty much guarantees that these two are going to meet and become fast friends. They may even bond over their mourning and kick off a romance. If you put all these puzzle pieces together, there’s a chance that Willow is “Wiley’s” birth mother.

After all, we don’t know how Julian (William DeVry) got the bio mom to back off. It’s possible he just came clean about Wiley’s death and the fact that there was a switch. Julian may have explained the circumstances as he knows them and offered an emotional plea. That may be why the birth mom let it go. If Willow is the mother we’re seeking, it would explain why she’s attending a bereavement meeting.

Again, Willow’s awfully cagey. She might hit it off with Michael and open up, but she probably wouldn’t share everything. GH could give Michael just enough to build the suspense! Willow might talk about giving her baby up and then changing her mind. Michael could relate to that since he wasn’t thrilled about being a father at first. He eventually came around on the idea and now he’s truly hurting.

Once Willow revealed her child’s unfortunate death, Michael could connect with her over that, too. Willow would undoubtedly protect Brad (Parry Shen) and Lucas’ (Ryan Carnes) privacy. That could be the crucial puzzle piece that Michael misses, but maybe Chase will come into play here.

If Michael and Willow stick with friendship, she might begin a romance with Chase. That could lead to even more confessions. General Hospital spoilers say Michael and Chase’s bond will grow stronger soon. There must be a reason GH will keep them in each other’s orbit and it may involve Willow.

Chase might hear Lucas and Brad’s names at some point or learn something else that tips him off. It could lead to this whole mystery unraveling. Even if Willow isn’t the birth mom, her bereavement group attendance with Michael is too glaring to ignore. She’ll inevitably be a step on the path to the big reveal.

Whatever the case, General Hospital just introduced some intriguing story elements. GH fans will be curious to see where this hot plot heads next. We’ll give you updates as other news comes in. Stay tuned to the ABC soap and don’t forget to check CDL often for the latest General Hospital spoilers, updates and news.