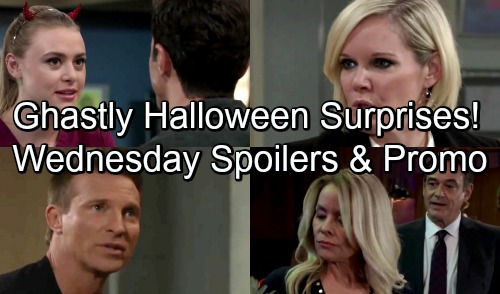 General Hospital (GH) spoilers for Wednesday, October 31, tease that some tricks and treats are coming up. For starters, we should address Ryan’s (Jon Lindstrom) deception and the deadly danger he’s plotting. Mary Pat (Patricia Bethune) pushed him too far, so Ryan grabbed a nearby metal pick and stalked off after her. It looks like she’s in for a ghastly Halloween surprise!

Later, Ryan will catch up with a seething Ava. She’ll be set off again, presumably by Kiki (Hayley Erin) and Griffin (Matt Cohen) – or anyone else who dares to get in her way. It’s clearly not a good idea to cross Ava right now. Naturally, Ryan will continue to fuel Ava’s dark side. She’ll inevitably regret getting caught in “Kevin’s” risky web.

At GH, Kiki will have some hope for the future. After Griffin makes an admission, Kiki will wonder if it means he’s coming back to work soon. She cares about Griffin and certainly wants him to keep doing what he does best.

However, Kiki will also love the thought of working alongside her new beau. She’ll probably think they can steal some kisses on their breaks and continue all the bonding. Griffin may not want Kiki to get too excited just yet, but he’ll definitely be hopeful, too.

Other General Hospital spoilers say Liz (Rebecca Herbst) will give Laura (Genie Francis) a pep talk. After they discuss some important issues, Liz will think this proves Laura would make a great mayor. She’ll give Laura her full support and suggest that things are going to work out for her.

Over with Peter (Wes Ramsey) and Maxie (Kirsten Storms), they’ll don some baseball costumes for James’ first Halloween. Peter recently admitted it’ll be his first Halloween, too. He was raised out of the country and it’s not like Daddy Faison (Anders Hove) was big on fun holidays anyway!

Peter will mention a fundraiser and ask Maxie if she’d like to come along. She’ll seem hesitant, but Peter will probably convince her eventually. Speaking of that fundraiser, Mac (John J. York) and Felicia (Kristina Wagner) will pitch in with it. They’ll step up their game and hope to raise some money for Laura’s campaign. Of course, Felicia’s creepy encounter with “Kevin” could bring some drama.

General Hospital fans will also see a Halloween bash for the kids in town. Franco (Roger Howarth) will pull off quite a party, but how will Aiden (Jason David) handle the pressure? As for Jason (Steve Burton), he’ll be taken aback by Sam (Kelly Monaco) and Danny’s (T.K. Weaver) gift. They’ll have some happy moments as a family, so “JaSam” fans will want to tune in.

Finally, Nina (Michelle Stafford) and Valentin (James Patrick Stuart) will sit down for dinner. They’ll grow closer, so everything’s going according to plan for the thrilled Cassadine. Valentin had better enjoy this since trouble’s undoubtedly looming! We’ll give you updates as other news comes in. Stick with ABC’s GH and don’t forget to check CDL often for the latest General Hospital spoilers, updates and news.