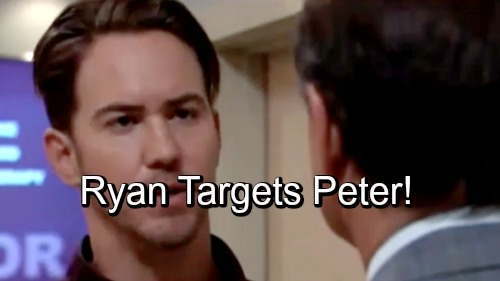 General Hospital (GH) spoilers tease that Peter August (Wes Ramsey) may be in grave danger. Who could be his next big threat? Ryan Chamberlain (Jon Lindstrom), who’s currently posing as Dr. Kevin Collins (Jon Lindstrom). This evil twin has taken over his brother’s life, so it’s just a matter of time until his duping turns deadly.

Peter is the new owner of The Invader, a tacky tabloid known for spreading Port Charles’ biggest scandals. However, Peter’s trying to clean up The Invader’s act. He wants it to be a legitimate newspaper, so he’s working toward that goal with Lulu Falconeri’s (Emmy Rylan) help.

To jumpstart Peter’s vision and boost reader interest, he greenlit a special edition of The Invader. This edition will cover the 25th anniversary of Ryan’s crime spree, so it’ll have plenty of juicy details from the past. Lulu hopes she can focus on the courage of the victims, not the brilliance of Ryan’s wicked ways.

Of course, Ryan would much rather have his vile crimes be the focus. He wants to be viewed as a manipulative genius, not just a loathed monster. Lulu could easily be targeted over her compassionate angle! Nevertheless, GH spoilers say Peter could get the worst of Ryan’s wrath. As The Invader’s publisher, he’s got final approval and will inevitably be blamed for how Ryan’s portrayed.

Unfortunately, Peter unknowingly made himself even more vulnerable. Along with everyone else in PC, Peter assumed Ryan was the real Kevin. He asked for assistance with his claustrophobia and anxiety, which could mean bad news. Peter’s hoping to get a prescription, so Ryan told him to make an appointment. If Peter goes through with it, he could be putting his life on the line.

If Ryan wanted to take Peter out, all he’d have to do is hand over some poison pills. Ryan could give Peter a few samples of something undetectable. He could plan to explain away Peter’s death as a suicide. Some General Hospital fans out there wouldn’t mind if Peter was killed off. Others would rather see him become a hero than a murder victim.

There’s a chance Peter will pick up on some sinister clues eventually. He recalls how his father, Cesar Faison (Anders Hove), used to operate. Perhaps Peter will sense that “Kevin’s” up to no good. He might brush off his concerns at first since he doesn’t know Kevin very well, but too many warning signs could spell trouble!

Ryan’s secret could be in jeopardy, which would bring additional danger for Peter to overcome. Can Peter survive the perilous road ahead? General Hospital spoilers say Peter will have to handle some tricky situations, so stay tuned. We’ll give you updates as other GH details emerge. Stick with the ABC soap and don’t forget to check CDL often for the latest General Hospital spoilers, updates and news.