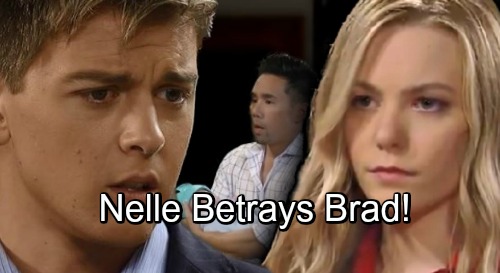 General Hospital (GH) spoilers tease that Brad (Parry Shen) will grow increasingly concerned. Thanks to “Wiley’s” heart condition, it’s raised questions about his birth parents’ medical records. If Lucas (Ryan Carnes) starts poking around, he could put the puzzle pieces together and learn more than he bargained for.

Brad also has to worry about Wiley’s biological father resurfacing. Alexis (Nancy Lee Grahn) assured Brad that if that happened, this mystery guy wouldn’t be able to take the baby. However, she acknowledged each case is looked at separately. As a result, Brad will continue to view this as another threat.

Unfortunately, Brad may be focusing all on the wrong angles. Several clues are in Michael’s (Chad Duell) hands, so that may be a better reason to fret. You can bet Michael will end up getting more hints soon enough. After all, Nelle (Chloe Lanier) has to be getting restless behind bars. Her only form of entertainment right now may be tormenting Michael and the Corinthos clan.

It’s possible Nelle will send another letter or even summon Michael for a chat. He might turn her down initially, but curiosity could get the best of him sooner or later. The wheels already seem to be turning for Michael, so General Hospital spoilers say that’ll spell bad news for Brad.

Michael has no idea that “Wiley” is actually Jonah, but he can tell Nelle’s up to something. After her last letter, he looked baffled by her manipulative words. As time goes on, Michael may realize there’s more to that comment about spending time with Brad and Lucas’ son. The inherited heart condition will definitely come up again at some point, too.

When this scheme kicked off, Nelle’s main goal was hurting Michael and his family. Of course, Nelle could always change her mind. What good is this secret if she can’t blow it up? Michael’s suffering right now, but he’ll eventually move on with his life and be just fine. Nelle can’t have that, now can she? Perhaps she’ll wait until Michael’s finally grieved the loss and finally drop the bomb.

If Nelle thinks there’s no hope for a release, she might as well create some GH drama. Then again, Nelle could always use the secret as leverage somehow. She could try to gain her freedom in exchange for info.

Nelle could even twist this around and argue that Brad’s responsible. Maybe she could claim Brad came along and swapped the babies while she was out of it. We can’t forget that Nelle had been in a car accident and went through a very traumatic birth. Nelle could have a fake epiphany about what happened or simply drop the necessary hints and play dumb.

Bottom line, Nelle just might be Brad’s biggest threat! He’s busy worrying about the other possible ways he could lose “Wiley,” but Nelle shouldn’t be dismissed. She’s bound to strike when Brad least expects it! We’ll give you updates as other General Hospital details emerge. Stay tuned to ABC’s GH and don’t forget to check CDL often for the latest General Hospital spoilers, updates and news.