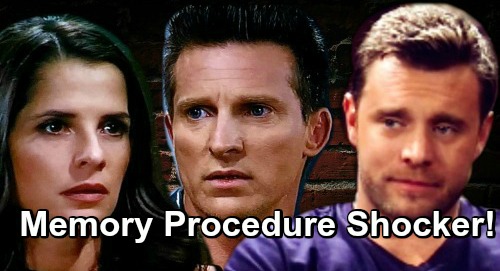 General Hospital (GH) spoilers tease that Drew (Billy Miller) will remain between a rock and a hard place. In Monday’s episode, Drew mentioned the flash drive to Jason (Steve Burton) and suggested he wasn’t sure what to do. He doesn’t want Jason’s memories swirling around in his head, but he hates the idea of risking the new memories he’s made.

Of course, it seems likely that Drew will ultimately take the risk anyway. Why else would GH bring up Drew’s past after all this time? General Hospital fans have been waiting for answers about Drew’s history, so it’d be cruel to yank this storyline away again. It’s time for the show to dive deep and let us know who Drew really is.

Drew may decide that he just can’t live with so many questions. With a little encouragement from Oscar (Garren Stitt), Drew might take the leap. Naturally, that could bring the consequences he fears. Drew could easily forget all about his relationship with Sam (Kelly Monaco) as well as his kids. That could actually set up a surprising new love triangle and add an extra reunion obstacle for “JaSam.”

Let’s think about the reality of wiping the Port Charles slate clean. If Drew doesn’t recall any of the memories he’s made in PC, his loved ones will want to help. Sam would be particularly invested in this because of Danny and Scout. Drew may not be Danny’s dad, but he believed he was for quite some time. He’s still an important part of the kid’s life and it’d be a shame to see him forget Danny entirely.

Drew would also lose his memories of Scout’s birth and each milestone along the way. Those are precious moments, so it’d break Sam’s heart if Drew forgot them. It’s easy to imagine Drew reverting to stoic Navy SEAL mode and being a bit distant with Scout. He could find it tough to connect again, which might make Sam step up her efforts. She might think she can help Drew remember.

Could Drew and Sam be drawn to each other again in the process? Perhaps old feelings could get stirred up for Sam. Her care and concern could pull Drew closer. However, this memory procedure would result in Drew recalling his intense bond with Kim (Tamara Braun). They shared something special in the past, so that passion could be reignited.

Kim would do her best to help Drew reconnect with Oscar, so there’d be another way for them to come together. Drew could find himself torn between Sam and Kim, but where would that leave Jason? He might be stuck on the sidelines again. General Hospital spoilers say Jason and Sam have more obstacles ahead, so Drew might be one of them!

Do you think Drew will go through with the memory procedure? Could the consequences lead to an unexpected love triangle? We’ll give you updates as other GH news comes in. Stay tuned to the ABC soap and don’t forget to check CDL often for the latest General Hospital spoilers, updates and news.