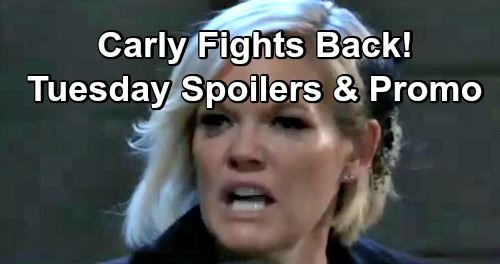 General Hospital (GH) spoilers for Tuesday, December 11, tease that Liesl Obrecht (Kathleen Gati) will fly into a rage. At the PCPD, she’ll demand that Anna (Finola Hughes) and Finn (Michael Easton) take her to GH at once. Liesl believes Britt (Kelly Thiebaud) is extremely ill, but it was all a ruse to get her back to Port Charles. Once Liesl realizes this was indeed a trap, she’s going to blow her top!

Over with Chase (Josh Swickard), he’ll run into Willow (Katelyn MacMullen) and offer to buy her a drink. Chase will try to turn on the charm and perhaps be a bit smoother this time around. His flirting attempts have been pretty clumsy so far, so he needs to step up his game. Unfortunately, it looks like a misunderstanding is on the way. Chase’s plan to win Willow over could take a huge step backward.

Other General Hospital spoilers say Nina (Michelle Stafford) will overhear a shocker. She’ll catch part of Sasha (Sofia Mattsson) and Valentin’s (James Patrick Stuart) conversation, so she’ll be left wondering what’s up. Nina will find them talking about something they’re doing that could hurt her. She’ll naturally be curious about what it might be, so Valentin and Sasha will have to explain.

Of course, these schemers won’t be spilling their fake daughter plot. They’ll cover their blunder, but Nina will still get some sad news. It sounds like Sasha will once again express her desire to leave town. Nina may worry that Sasha’s going to walk out her life, but Valentin will make sure that doesn’t happen. Even if Sasha takes off for a bit, she won’t be ditching Nina entirely if Valentin can help it.

Meanwhile, Ava (Maura West) and Carly’s (Laura Wright) showdown will heat up. GH fans know Ava isn’t handling Kiki’s (Hayley Erin) death very well. She’s in a dark place and it’s coming out in some destructive ways. Ava feels like everyone blames her for Kiki’s demise – especially Carly (Laura Wright). She thinks Carly only came to the service to make her feel guilty, but that’s obviously not the case.

Ava will rant about Carly’s bitterness over the pill swap and losing Morgan (Bryan Craig). She’ll insist that Carly got what she wanted. Ava will snap that she paid for Morgan’s death with her daughter’s blood, but Carly will defend herself. She genuinely cared about Kiki and never wanted such a tragic end to her life.

Other General Hospital spoilers say Ryan (Jon Lindstrom) will be thrilled over all the chaos he’s caused. He’ll tell someone he’s found his true calling, which probably means wreaking havoc and doting on Ava. The person he’s chatting with will have no idea that mild-mannered “Kevin” is actually a vicious killer.

Elsewhere, Laura (Genie Francis) will talk to Sonny (Maurice Benard) about Ryan. She’ll suggest that after 25 years, Ryan has claimed a new victim. Laura may mean her own marriage! She feels like things fell apart after all the Ryan drama was stirred up again, so she’ll confide in Sonny and get some support.