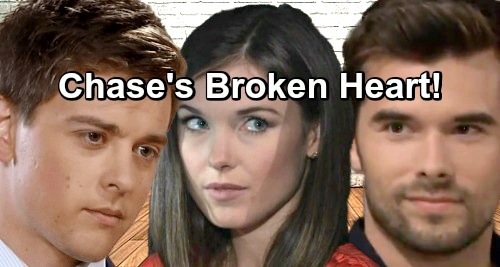 General Hospital (GH) spoilers tease that Willow’s (Katelyn MacMullen) secrets will bring some explosive revelations. The jury’s still out on whether Willow is Nina’s (Michelle Stafford) real daughter or not. GH will have to deliver a few more hints before anyone can make that call.

However, we’d bet big money that Willow is “Wiley’s” anonymous birth mom. Her latest chat with Michael (Chad Duell) seemed to seal the deal. Michael was grateful to see Willow’s face in the bereavement group crowd. He thanked her for giving him the strength to open up about Jonah and hoped Willow could find a way to open up soon, too.

Willow also grew curious about Jonah’s mother, but Michael wouldn’t share too much about Nelle (Chloe Lanier). He simply admitted it was complicated, which was probably the right response since Michael’s interested in Willow. Telling Nelle’s chaotic tale might scare her off!

Unfortunately, Michael’s a bit late to the party. Chase (Josh Swickard) has already made his move and will make more of them in the coming weeks. He’ll quickly find himself falling in love. On December 21, Chase just won’t be able to get Willow off his mind. General Hospital spoilers say he’ll hope to make Willow his girlfriend ASAP.

Of course, Willow doesn’t seem all that into Chase. We’re all wondering why since he’s a great catch! Perhaps Chase is just a bit too cheerful for Willow right now. Michael’s got that same melancholy vibe she’s working, so she must appreciate that he’s in the same headspace.

General Hospital spoilers say Chase will get in too deep, too fast. He’s clearly setting himself up for heartbreak. There’s a good chance Willow will have to let Chase down gently. She’ll inevitably strengthen her bond with Michael, so he’s probably the one she’ll want to start a real relationship with.

That makes sense in light of the potential birth mother shocker, but what about poor Chase? Will he ever find love? Many GH fans saw a nice spark between Chase and Valerie (Brytni Sarpy), so that might be fun for the show to explore. Lulu (Emme Rylan) could be an option if she finally moves on from Dante (Dominic Zamprogna). Even Sasha (Sofia Mattsson) could catch Chase’s eye down the road.

Let’s hope Chase can bounce back and get the love interest he deserves! We’ll give you updates as other GH news comes in. Stay tuned to the ABC soap and don’t forget to check CDL often for the latest General Hospital spoilers, updates and news.