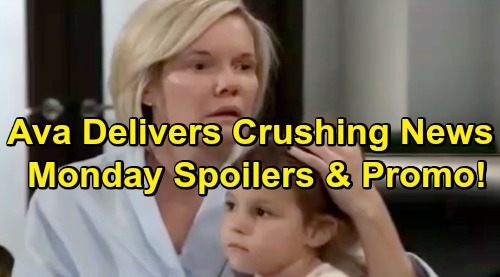 General Hospital (GH) spoilers for Monday, December 10, tease that Marcus (Nigel Gibbs) will explain his point of view. His wife can’t recall much thanks to her condition, so he doesn’t want her any more confused than she has to be. Marcus will push Sonny (Maurice Benard) to keep Mike (Max Gail) away for the sake of Yvonne’s (Janet Hubert) health. He just won’t think this friendship is a good idea.

Sonny knows Yvonne means a great deal to Mike, so he may hope they can work something out. However, Marcus will insist that Mike should keep his distance. He won’t want to speed up Yvonne’s decline. At GH, Drew (Billy Miller) will shut down Margaux’s (Elizabeth Hendrickson) flash drive peace offering. He’ll assure Margaux that he’s not interested, but she’ll ask why he’s so afraid to take it.

Drew will eventually accept the flash drive, so that’ll leave him wondering what to do next. Getting his memories back was never really an option until now, which means he’ll have a lot to mull over. Meanwhile, Jason (Steve Burton) will meet with Oscar (Garren Stitt) in his hospital room. Oscar wants Jason to be the executor of his will, so they’ll need to talk about what that entails.

Since Oscar’s concerned about his Quartermaine shares causing drama, Jason will promise to take care of it. They’ll come up with a way to avoid conflict if Oscar indeed dies. Over with Jordan (Briana Nicole Henry), she’ll bring “Kevin” aka Ryan (Jon Lindstrom) up to speed on the latest murder details. Of course, she won’t be telling Ryan any new info. As the killer, Ryan’s in the loop on the chaos he caused.

Jordan will mention something about the murderer enjoying his handiwork. “Kevin” will offer a slight smile and agree with the commissioner. He certainly enjoys the havoc he’s wreaking in Port Charles! Ava (Maura West) will face a devastating task thanks to Ryan’s actions and Kiki’s (Hayley Erin) grim fate. She’ll have to tell Avery (Ava and Grace Scarola) that her beloved big sister’s gone forever.

Other General Hospital spoilers say Kiki’s funeral will get underway. All of Kiki’s friends and family members will show up to honor her memory. The service will start out somber and respectful, but it won’t be long until hostility derails it. Carly (Laura Wright) will unintentionally provoke Ava, so this crushed mom will unleash her wrath and leave all the other attendees in shock.

General Hospital fans won’t want to miss Monday’s exciting scenes. We’ll give you updates as other GH news comes in. Stay tuned to the ABC soap and don’t forget to check CDL often for the latest General Hospital spoilers, updates and news.