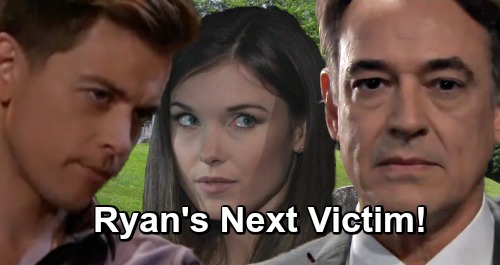 General Hospital (GH) spoilers tease that Willow (Katelyn MacMullen) may find herself in grave danger. GH fans know there’s a serial killer on the loose in Port Charles. Ryan (Jordi Vilasuso) started off his latest crime spree by killing Mary Pat (Patricia Bethune). She was in the way, so he did what he had to do.

Kiki (Hayley Erin) was next on Ryan’s murder list. After Ava (Maura West) admitted it’d be easier if Kiki wasn’t in Port Charles, Ryan decided to take her off the map entirely. General Hospital spoilers say Kiki’s death will spark even more drama as Jordan (Briana Nicole Henry) and Chase (Josh Swickard) work on the case.

However, an interesting shift seems to have happened within Ryan. His first two killings were about necessity or pleasing the woman he loves, but his next killing may be purely for pleasure. Ryan looked awfully pleased with himself during his last conversation with Jordan. She admitted that they think Mary Pat’s murder is connected to Kiki’s.

Based on Ryan’s grin, it looks like he may target his next victim soon. There’s no predicting how many people Ryan will take out before he’s caught. Could Willow end up on Ryan’s radar? She hangs out at GH a lot due to those bereavement meeting and school field trips. Brutally murdering a school teacher for no reason would really boost Ryan’s notoriety as a dangerous killer.

Ryan obviously doesn’t want to get caught, but he still wants all the glory. He hopes to make a big mess and leave the PCPD scrambling to sort it out. Imagine their confusion if Willow is thrown in the mix.

If GH really wanted to rev up the drama, they could tie this in with the baby swap story. It’s looking more and more like Willow is the anonymous birth mom, so this strategy makes sense. What if Willow puts the Wiley and Jonah switch together? She could finally fit the puzzle pieces after a few details come out.

Of course, Ryan might decide to kill Willow at the worst possible time. Just before she could fill Michael in, Willow’s life might be tragically cut short. The character is a bit of a dud, so most General Hospital viewers wouldn’t mind. Still, we’ve met Willow and know her well enough to have a reaction if she’s killed. Willow would be the perfect victim to include in this hot plot.

Michael’s love interests are typically unlucky, so Willow may become part of the curse. Will GH use her to cross over Ryan’s murder streak with Brad’s (Parry Shen) scheme? General Hospital spoilers say some craziness is set to unfold, so we’ll give you updates as other news comes in. Stay tuned to the ABC soap and don’t forget to check CDL often for the latest General Hospital spoilers, updates and news.