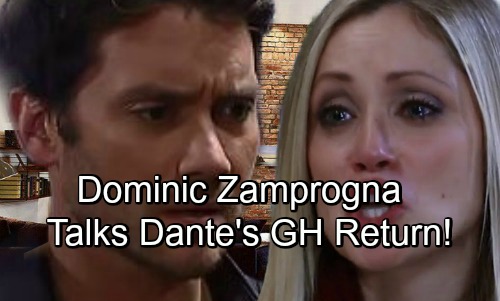 Many General Hospital fans were devastated when Dominic Zamprogna (Dante) left the ABC soap earlier this summer. It was all rather quickly concocted and explained – Dante suddenly joined a WSB task force and went undercover to track down arms dealer Raj (Noshir Dalal), who once attempted to kill Lulu (Emme Rylan).

In a new article in ABC Soaps In Depth, Zamprogna talks about what he’s got going on project-wise now that his run as Dante is over. One thing is clear: Zamprogna is enjoying playing roles that are polar opposites of the squeaky-clean police detective Dante.

For example, he portrays a Guatemalan drug cartel operative in Amazon’s new Canadian revenge thriller series, Tin Star. Says Zamprogna of the role, “I don’t get arrested, but I don’t get away with it, either…I speak a lot of Spanish and I go out in a freakin’ cool way.” It will certainly be interesting to see Zamprogna in a darker role!

Zamprogna is also producing and starring in a movie about Charles Ponzi, the man who invented the infamous “Ponzi scheme” investment scam. As he told ABC Soaps In Depth, “As an actor, I’ve been lucky since leaving [GH] that I haven’t been waiting around for things. But who knows what the next year could bring? So, while I’m waiting I want to be shooting my own projects and possibly directing and acting in my own things.”

It certainly sounds like Zamprogna plans to stay busy! But does that mean we’ll never see him back at GH? Will Dante ever finish his mission to capture Raj and return home to Lulu and Rocco (O’Neill Monahan)? Well, Zamprogna doesn’t rule out a GH return! “I could come back and be the [police] commissioner…I’d do recurring…that would be cool.”

Would you like to see Dante return as a recurring character on GH? Stay tuned to the ABC soap and don’t forget to check CDL often for the latest General Hospital spoilers, updates, and news.