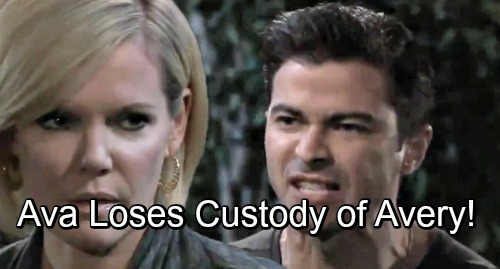 General Hospital spoilers tease that Griffin will confront Ava about the blanket on Monday’s new GH episode, August 27. Ava will of course confess. Ava feels she did nothing wrong. In Ava’s mind, Carly deserves what she got. Ava feels empathy for no one but herself. Ava proved this in court when she pushed Scott to question Griffin. Helping Nelle bought Ava time with Avery. Ava believes this was a means to an end.

Griffin couldn’t see this before. When Ava turned on Kiki, Griffin realized the truth. Griffin’s revelation was too little too late. General Hospital spoilers have already made clear that Ava is bent on destroying Griffin. Ava wants Griffin to hurt, and his job is the only way to do that. Ava almost cost Kiki her court case with her stunt as well. Griffin cares for Kiki and feels she deserves better than Ava.

One Good Turn Deserve Another

Griffin is angry and hurt. Griffin sees that Ava is spiteful and uncaring. As a priest, Griffin believes in forgiveness. As a man scorned, Griffin wants revenge as well. Griffin doesn’t want Ava to hurt physically, but he wants justice. Justice for Kiki, Morgan, Sonny, Carly, and himself.

There is only one way to make this right. Sonny and Carly need to know the truth. General Hospital spoilers predict that after hours of soul-searching, Griffin decides to do that right thing. Griffin realizes what Avery is facing in the future. Ava cannot be allowed to treat Avery the way she has Kiki. Griffin feels it is in Avery’s best interest to save her from her mother before it’s too late.

Sonny tried to warn Griffin about Ava. Griffin honestly thought she had changed. Ava has since proven Sonny right and cost Griffin his job. As Duke’s son, Griffin feels that he owes Sonny the truth. As Sonny’s friend and a former priest, Griffin feels he must do what is right.

Gh buzz is that Griffin goes to Sonny and after much-needed reassurance, comes clean to Sonny. Griffin will tell Sonny about his conversation in the park. When Sonny learns of little Leo’s revelation, Diane will be on the case. Will Sonny have to go to court to get Avery back full time? Will Ava give up custody willingly to avoid accessory to attempted murder charges.

General Hospital fans are vocal about the fact that Ava has proven she has no business with a child. Sonny and Carly love Avery and would do anything for her. Hopefully, soon Avery will be home where she belongs.