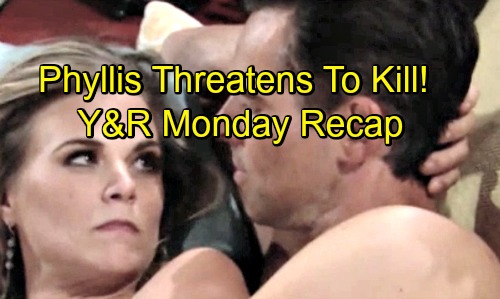 The Young and the Restless (Y&R) spoilers for Monday, August 27, 2018 start in Crimson Lights, where Rey (Jordi Vilasuso) is playing on his computer, when Sharon (Sharon Case) speaks briefly to him. Abby (Melissa Ordway) unsuccessfully attempts to retreat before Rey spots her and begs to talk to her, hoping to fix things with Arturo (Jason Canela).

Abby refuses to betray Arturo, but is willing to hear what Rey has to say. He wants Arturo’s number, which is denied and when he asks Abby why she would be with someone like his brother; Abby warns him to watch his step!

Rey admits to meeting Nick (Joshua Morrow), but is quickly shut down by Abby when he asks questions about her family, particularly Victor (Eric Braeden) and his issues with JT (Thad Luckinbill); Abby tells him the conversation is done, advising him to stop with his questioning. After she leaves, Rey adds notes to his little book.

Mariah (Camryn Grimes) confides in her mom, Sharon that she hasn’t heard from Tessa (Cait Fairbanks) in a while, and their last phone call ended abruptly when Tessa was shouting at someone. Sharon suggests maybe Tessa is staying away on purpose to protect Mariah; but Mariah doesn’t believe that because Tessa said she loved her. Sharon reminds her that Tessa stole her private diary and cheated on her brother, Noah (Robert Adamson).

Mariah admits if this ends in heartbreak she is done with love for good. Outside the coffeehouse, Mariah calls Tessa, begging her to call back and if she has changed her mind about being with her, and if she has, she owes Mariah the truth.

At the GCAC, Lily (Christel Khalil) catches Mattie (Lexie Stevenson) and Charlie (Noaha Alexander Gerry) doing research on women prisons. Mattie has always been one to deal with facts and numbers but Charlie says he wants their mom to be prepared to protect herself, giving her a flashdrive with a documentary about prison life. Lily tries to assure her children to stay positive and strong.

Lily sits, overwhelmed at HWG, where Abby finds her. She explains what the twins have done for her, admitting she is extremely worried about what is going to happen as she was always sheltered and had a privileged life. She is certain she will not survive being in prison.

Billy (Jason Thompson) returns from his business trip to an infuriated Phyllis (Gina Tognoni). He suggests they spend some time on the Jabot yacht, but Phyllis reveals the yacht is booked. He wants to go somewhere else, but Phyllis demands answers before anything.

When she demands to know what is going on between him and Summer (Hunter King), he wants to call her but Phyllis informs him Summer is on the yacht and she had the WIFI disconnected, with Summer not being able to return to Genoa City until she says so.

Phyllis reveals Summer’s seduction plan to Billy, who is furious Phyllis would think he knew anything about it. Phyllis wants to strangle Summer but Billy attempts to talk her down, even suggesting she leaves Summer on the yacht and stranded, letting her stew as that is what she deserves!

After his show, Billy and Phyllis continue to disagree about Summer, as he leans in to kiss her, she pulls away. She wants to know if what Kyle and Summer told her was the truth, that he would be with Summer if Phyllis wasn’t in the picture. Billy is shocked and denies saying it, but admits he sucks half the time and has done crappy things but NO more!

Billy comes down stairs prepared to move out, understanding why Phyllis would think the worst; after all, he left Delia in the car alone, getting her killed and after all the horrible things he has done to Victoria (Amelia Heinle). Phyllis tells Billy that he is worthy of her and hugs him, apologizing for ever doubting him.

Meanwhile, at Crimson, a pipe bursts again and Rey comes to Sharon’s rescue. He slyly asks her about her engagement to Nick and about the upcoming wedding. He admits to Sharon he is married, but him and his wife are currently taking a break from each other. After temporarily fixing the pipe, Sharon says he is entitled to a month of free coffee and welcome any time.

Phyllis and Billy enjoy some intimate time on the couch as Billy reminds her that they need to move out of Summer’s apartment immediately; they can be gone before she returns from her cruise. Phyllis agrees but says there is one more thing – She believes he was honorable when it came to Summer, but if he ever did screw around with her daughter, she would kill him!