The Young and the Restless Spoilers: Summer’s Pregnant – Billy or Kyle The Baby Daddy?

BY Sean O'Brien on August 24, 2018 | Comments: one comment
Related : Soap Opera, Spoiler, Television, The Young and the Restless 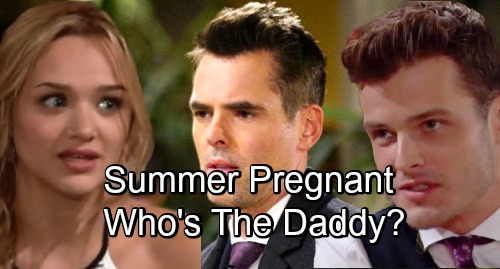 The Young and the Restless spoilers tease that Summer’s (Hunter King) dalliances with two men could easily produce a pregnancy. A choice of daddy for her first baby would be Billy (Jason Thompson), while Kyle (Michael Mealor) would be a distant second.

Sure, it’s fair to say that Summer hasn’t been with both men as of mid-August. But give her time.

There’s no doubt that Kyle wants Summer. As a matter of fact, he’s made a bet to win her romantic admiration back. If she can’t get Billy, Summer has agreed to become Kyle’s again-girlfriend. If Kyle loses the wager, he’ll be forced to relinquish his sweet ride sports car.

Summer’s proposed pregnancy would simply be a surprise if Kyle proves to be the father. They went steady, an old-fashioned term to be sure, for awhile a few years ago. Each character is early-twenty-something, somewhat suited to the other, and possesses the resources to provide generously for Syle’s offspring.

However, if Billy is the genetic father, all of Genoa City will be rocked. Silly’s baby would stun the masses and create wild havoc for months to come.

So, it appears likely that a theorized set of linked storylines would be written, meaning that the question of paternity would be raised and then held high for an extended time. That soapy scenario would withhold the true father’s identity in order to build momentum toward the eventual reveal.

Since returning to town, Summer has been fully disruptive. She recently told Phyllis (Gina Tognoni) that the attitude being evidence was developed. Summer decided to stop being a perceived doormat and instead go after all desired goals, using whoever was necessary. All resulting consequences were classified by a word, whatever.

Speaking of Phyllis, just imagine the betrayed rage she would project to the audience. Billy and Summer would surely receive the full force of old Phyllis, meaning the fierce personality Michelle Stafford formerly presented as that character.

Nick and Sharon (Sharon Case), as the stepmother, would be supportive of a Syle baby. Yes, that little boy, or girl would be unexpected. But Shick are stand-up parents and would welcome the grandchild.

Simultaneously, Summer’s biological mother, Phyllis, would welcome Summer’s baby as well. She’d also likely be relieved because that would free Billy of his stalker.

Jack (Peter Bergman) would be overjoyed that his one-time step-daughter and one-time presumed bio-child was having his son’s baby. Kyle’s mother, Diane (Maura West) would continue to look down on him from the afterlife, probably offering no otherworldly response.