BY Olivia Marie on August 23, 2018 | Comments: one comment
Related : Recap, Soap Opera, Spoiler, Television, The Young and the Restless 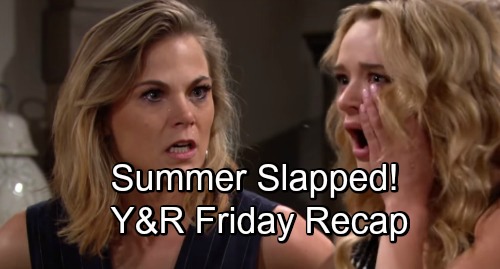 The Young and the Restless (Y&R) spoilers for Friday, August 24, 2018 start with Nikki (Melody Thomas Scott), who is worried about her daughter, Victoria (Amelia Heinle), visiting personal physician, Nate (Brooks Donnell). She admits the truth about Victoria and her troublesome relationship with JT (Thad Luckinbill).

Nate is sorry for everything they have been through, but isn’t sure how he can be any help since Victoria won’t talk to him and he isn’t a therapist. He does, however, believe her symptoms are signs of post traumatic stress and it would be much better for her to cope with it now, than bottle it up. Nikki shares that her son, Dylan McAvoy (then-Steve Burton) also suffered from PTSD.

Paul (Doug Davidson) finds Victoria at the coffeehouse, feeling suspicious that she hasn’t once come to see him about the elusive JT. She lets it slip that it would be impossible for the GCPD to get him behind bars; and when Paul presses her, she claims its because of their lack of catching him the last time he was in town. Paul promises they will not give up on searching for JT.

Abby (Melissa Ordway) and Arturo (Jason Canela) are enjoy their last moments together before he is to go on the business trip with Nick (Joshua Morrow), but when Arturo spots Rey (Jordi Vilasuso) at the Crimson counter, he quickly exits the coffeehouse with Abby.

The two pick up their date at GCAC, where Rey approaches their table. After Arturo orders him to leave, Abby demands to know who the mysterious man is; learning he is Arturo’s older brother, Rey. Arturo leaves the restaurant with Abby in tow and the two are able to share a few romantic moments at the Abbott home; although Arturo refuses to divulge any information about his past with Rey, they share a sweet “goodbye”.

Summer (Hunter King) reveals to Phyllis (Gina Tognoni) she has every intention of going to Philly; first saying she wants to prove herself to Lauren (Tracey E. Bregman) but quickly admits she wants Billy (Jason Thompson) for herself. Summer tells Phyllis she is right to think her relationship is dying because Billy wants her, and it is not a fantasy as he has already made it a reality by admitting if Phyllis wasn’t around, he would totally be into Summer.

Phyllis is sure the only reason Billy hasn’t told her the truth about Summer’s shenanigans is because he doesn’t want to destroy their relationship and keep Phyllis from knowing what a horrible person her daughter has become. They continue to argue as Phyllis insists it is over, but Summer isn’t quitting since she is so close to winning. Summer says she isn’t cheating, since she isn’t in a relationship, then brings up Phyllis running someone over with a car, and how twisted that really is.

When asked why she is so set on hurting her mother so bad, Summer says she learned all this from the master. Phyllis reminds Summer that she has always been “Princess Newman” and never had to fight for a single thing in her life.

Summer reminds her that her husband died, she was cheated on and now that it is biting Phyllis in the ass, its finally getting to her. “After a lifetime of making other people miserable, this is what women like you get when you get old. Karma comes a knocking and every ugly thing that you hate about me, is a direct reflection of you!” Summer screams at Phyllis right before Phyllis slaps her across the face.

Nikki and Nate arrive at Victoria’s office, and she is furious to see them. Nikki admits she told Nate about Victoria’s ordeal with JT, which only infuriates her. Victoria hates that her mother betrayed her, shouting that she had no right to share any of that information and wonders how Nikki would feel if Victoria shared all of her dark secrets to the world; an intrigued Nate looks on.

Kyle (Michael Mealor) receives a call from Gloria (Judith Chapman) informing him that Billy is gone for his trip. He quickly goes to Billy’s office sifting through file folders. He calls Ashley (Eileen Davidson) asking her what he should be looking for.

Summer comes down the stairs, more determined than ever to be with Billy. Phyllis wonders who she will seek comfort from but slams the door behind Summer as she leaves, then breaks down in tears. Quickly recovering, she makes a call, saying it is an emergency and she will make it worth their while!

Summer finds Kyle on the rooftop, explaining what happened with her mother. He suggests she rethink her plans with Billy before things become irreparable between her and her mother. He begs her to stop this, but she tells him he lost the bet and she won. Summer says Phyllis has crossed the line.

Summer inadvertently lets it slip how Billy is a fantastic gambler and once lost the Jabot boat in a bet, but quickly won the money in another game to win it back.

Summer then receives a text, telling Kyle things got easier than she thought and its a game changer. She shows the message to Kyle where it says Billy didn’t go to Philly and he wants to meet her on the boat instead. The next minute viewers spot Phyllis sitting behind the computer where the message to Summer was sent. Phyllis slyly says, “See you Sweetie, enjoy your cruise!”

It looks like some great episodes are in the works now that Summer and Phyllis are officially at war. We’ll keep you posted as other Y&R details emerge. Stay tuned to the CBS soap and don’t forget to check CDL often for the latest Young and the Restless spoilers, updates and news.