BY Sean O'Brien on August 23, 2018 | Comments: one comment
Related : Soap Opera, Spoiler, Television, The Young and the Restless 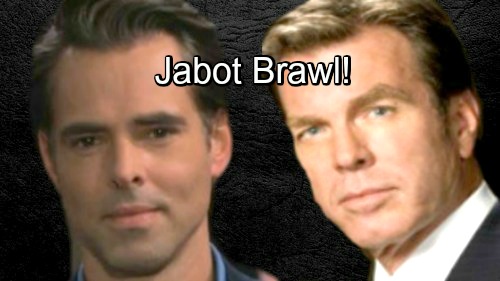 The Young and the Restless spoilers tease that Jack’s (Peter Bergman) challenge of Billy’s (Jason Thompson) power will result in a brawl at Jabot. The brothers will come to at least verbal blows over issues involving the family company and Phyllis (Gina Tognoni). Meanwhile, Ashley (Eileen Davidson) will be on-board the Billy take-down plan.

Sibling rivalry is alive in Genoa City. Of course Jack and Ashley aren’t related to Billy Boy, or so says that storyline as of now. Anywho, the elder Abbott siblings strongly encouraged Billy to become the Chief Executive Officer at Jabot a handful of months ago. Then, because he didn’t dance as desired, they turned on him.

Jabotique appears to be a worthwhile idea. Billy believed he was following his biological father’s (John, Jerry Douglas) example in developing a forward-thinking business plan. But Ashley, the person who exited Jabot without warning and took a position at Newman Enterprises for a smattering of weeks before returning, was aghast.

Jack, like Ashley hasn’t had good things to say about Billy’s summer reign. Oh, the Summer (Hunter King) reference will prove to be Billy’s undoing, but that topic will be linked shortly.

Nick (Joshua Morrow) followed through on Jack’s suggestion and purchased the holding company that controls Jabotique’s thirty store leases. That gives Jack influence over Billy’s ability to succeed. How long Nick waits before he applies the squeeze is a different calculation.

Jack’s often a braggart, so Billy is likely to learn how Nick came to gain control. The brother’s Abbott will battle when that occurs.

All Billy wanted was to forge his own path, which Ashley and Jack seem incapable of realizing. They didn’t want to give their little brother a chance, but Phyllis did.

Phyllis was the driving, positive force that caused Billy to believe he possessed the ability to succeed in business as long as he first believed in himself. Early results have been encouraging, as Billy’s modern methods have been accepted by the rank and file, along with Jabot’s partners.

Billy’s success in realizing the Jabotique plan quickly affirmed that, when given an opportunity, Thompson’s character is not the screw-up his siblings consider him to be. However the previously referenced Phyllis issue must now be raised.

As Y&R viewers know, Phyllis and Nick recently cavorted and Billy’s interactions with Summer have now been exposed. Both factors will soon split Philly. Jack and Ashley will use that personal issue to further underhanded plans in their ongoing attempt to remove the same sibling who they wanted as a since-revealed figurehead.