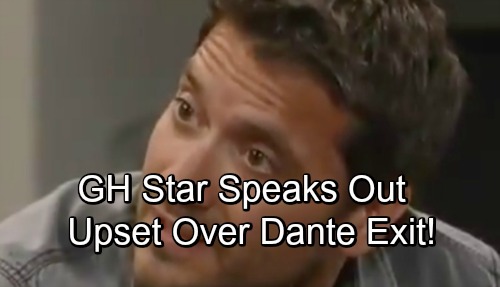 General Hospital (GH) spoilers tease that one ABC soap star is a bit disappointed in the recent writing. In an interview with Soap Opera Digest, Lisa LoCicero (Olivia) discussed the exit of her character’s beloved son. Dante (Dominic Zamprogna) was rushed off canvas for a special mission, so he didn’t have much time for goodbyes.

Of course, Lulu (Emme Rylan) had a sweet farewell with her husband. That was nice for “Lante” fans, but what about Dante and Olivia?! Many General Hospital viewers were bummed that Olivia couldn’t see Dante once more before Zamprogna’s departure.

It turns out LoCicero was pretty bummed as well. She finally opened up about her frustration over Dante’s exit, so let’s see what she had to say.

“I was dismayed, as well, to be honest, and more so because I’ve just been getting so much feedback from people being sorry that these characters they had invested in over the past decade weren’t going to get a send-off and have some closure,” LoCicero said. “It was disappointing.”

LoCicero really seems to have captured how viewers felt. It would’ve been great for Dante to share a final scene with Olivia, but it appears they didn’t have time to squeeze it in.

However, SOD revealed that Zamprogna changed a line to honor her. He noted that his mom was going to kill him for not saying goodbye in person, so at least the problem was addressed.

LoCicero was touched that Zamprogna decided to include it. She exclaimed, “I was not aware of that! I did not know that. That’s sweet. My baby!” LoCicero also talked about how happy she is for Zamprogna, who left to pursue other projects. She’s thrilled to see Zamprogna spreading his wings and flying high.

Finally, LoCicero mentioned the fan reaction to her inclusion in Kiki’s (Hayley Erin) “Me Too” storyline. General Hospital watchers will recall that Olivia took part in a crucial meeting. Several ladies gathered to convince Kiki that her battle mattered. Sexual harassment is a serious issue, so they shared their stories and showed Kiki how it much it meant for her to fight.

“I got more response about that than anything in my history of being on the show, for sure,” LoCicero said. She was proud to be part of those meaningful moments and hopes they can help spark real-world changes. Let’s hope GH finds other exciting ways to include Olivia down the road.