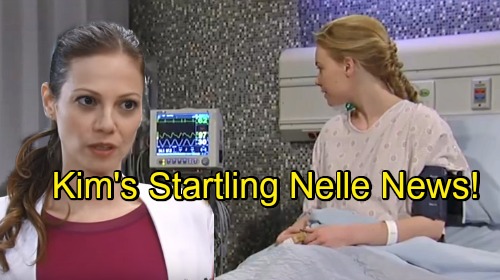 General Hospital (GH) spoilers tease that Nelle (Chloe Lanier) may be gone, but she certainly hasn’t been forgotten. Nelle caused plenty of damage during her time in Port Charles. The aftermath of her last scheme will continue in the months ahead.

Nelle gave Brad (Parry Shen) a dangerous secret to keep and left Michael (Chad Duell) with severe heartache. They’ll both struggle under the weight of their issues, but they’ll just have to keep it together somehow. As for Nelle, some surprising updates are on the way. On a new GH episode August 28, General Hospital spoilers say Kim (Tamara Braun) will offer some news regarding her patient.

Will Nelle have a health crisis in the slammer? Will this be a standard post-birth checkup instead? Either way, Kim will undoubtedly run some tests and look over Nelle’s medical file. Chloe Lanier’s run has seemingly wrapped up, but we can’t rule out another scene or two. You never know what GH might’ve held back to air later.

Regardless, Nelle will at least be mentioned. Who will Kim talk to afterward? She can’t give out too much information to anyone, but she might feel like Michael deserves a bit of an explanation. Kim knows Michael hates Nelle’s guts, but she was still the mother of his child. Just to ease her own mind, Kim may fill Michael in. He probably won’t care, but he should thank Kim for thinking of him.

However, there could be a crucial plot reason for all this. Kim recently mentioned some blood work for a case she’s working on, so that could tie in here as well. It’s possible Nelle will be summoned to GH if Kim has noticed something peculiar. It might be some potential health problem that Kim wants to test for.

Of course, “Jonah” (who was actually Wiley) had an autopsy to determine the cause of death. We can assume the baby’s DNA details are on file. If Kim’s checking out Nelle’s medical files, it sets up the possibility of the truth getting out. Kim could easily see something in the records that doesn’t match up. There may be some detail that lets Kim know it’s impossible for Nelle to be “Jonah’s” mother.

Kim would probably think it was a mistake at first. She might brush it off as nothing, but she may change her tune after Julian (William deVry) starts poking around. Thanks to Brad, Julian will know the real story before long. Kim may put the clues together somehow and find herself in an impossible situation.

As we’ve seen with Griffin (Matt Cohen), even the best doctors will keep secrets for self-preservation or just to avoid drama. If Julian begs, that’d give Kim another reason to keep quiet. Secrets tend to trickle out on soaps, so Kim could be next in line to learn about the baby swap.