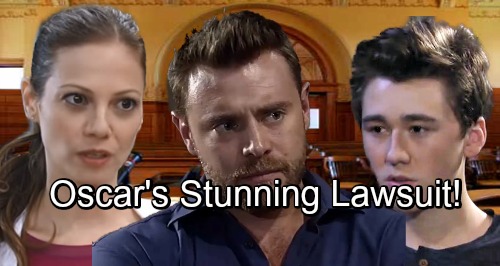 General Hospital (GH) spoilers tease that Alexis (Nancy Lee Grahn) will move forward with Oscar’s (Garren Stitt) plan. She was on the fence about helping the sick teen, but it’s clear that he’s determined to fight. Oscar doesn’t believe Drew (Billy Miller) and Kim (Tamara Braun) are acting in his best interest. He’s at least hoping there’s enough proof to suggest they aren’t!

Alexis will take on the case, but she’ll realize she’s going to ignite a firestorm. She’ll prepare for backlash as she works on Oscar’s complicated lawsuit. General Hospital spoilers say Oscar will be pleased to have Alexis in his corner. She’s the best attorney in town, so there’s no one else he’d rather have on his side. Oscar will believe he actually has a good chance of coming out on top in court.

Of course, Kim and Drew are going to be blindsided. After another heated argument, Oscar will blurt out that he’s suing them emancipation. His shocker will cut deep, especially for Kim. GH fans know it was just Kim and Oscar for many years. Drew certainly loves his son, but he’s a recent addition to his life. Oscar’s been Kim’s whole world from the day he was born.

Kim will try to talk some sense into Oscar this week. Drew will back her up, but Oscar will be adamant about taking control. That’ll leave his parents to shift their focus. Kim and Drew’s shock will turn to anger. They’ll direct their rage at Alexis for even agreeing to accept Oscar as a client.

However, General Hospital spoilers say Alexis knows exactly what she’s doing. She’s thought this over carefully and has a specific plan in mind. Alexis has some ulterior motives and that’ll become apparent to Kim. It looks like Kim will even accuse Alexis of getting back at her over Julian (William deVry).

Alexis probably wouldn’t be that petty though. She’s not the kind of gal who would exploit a teenage boy with cancer. Instead, Alexis may be hoping this brings Oscar and his parents together somehow. Perhaps she’ll need Oscar to say some things about them that he’s just not willing to say.

Oscar may realize how good he’s got it eventually. Drew and Kim have made mistakes, but they genuinely care and just want their boy to have a shot at survival. With any luck, maybe Alexis will spark Oscar’s involvement in the experimental treatment.

General Hospital viewers won’t want to miss all the confrontations and curveballs. We’ll give you updates as other GH news comes in. Stay tuned to the ABC soap and don’t forget to check CDL often for the latest General Hospital spoilers, updates and news.