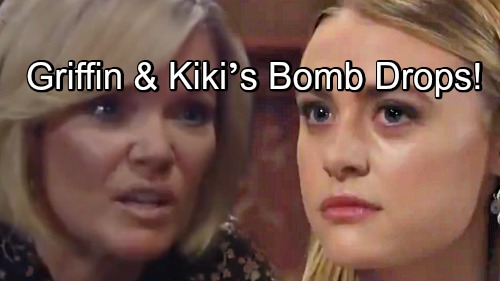 General Hospital (GH) spoilers tease that Kiki (Hayley Erin) will remain nervous about the big trial. She considered dropping the case entirely, but Alexis (Nancy Lee Grahn) set up a meeting to change her mind. After listening to so many workplace harassment stories, Kiki knew what she had to do. She intends to take stand against Dr. Bensch (James DePaiva) and set an example for other suffering women.

Of course, that doesn’t mean Kiki will be brimming with confidence. This is a scary situation, especially since Kiki’s keeping secrets from her attorney. General Hospital fans know Kiki and Griffin (Matt Cohen) had a tipsy one-night stand. If the truth about that evening comes out, it could certainly spell disaster in court.

Kiki will continue to tell herself that it won’t hurt her chances. She’ll hope to keep the hookup under wraps, but she can’t do much about the picture of their warm embrace. However, Scott (Kin Shiner) will try to take care of that. General Hospital spoilers say he’ll advise against using the pic and attacking the victim. Scott may argue that it’ll just make Dr. Bensch look like more of a villain.

Unfortunately, Dr. Bensch is awfully smug. He knows he crossed the line with Kiki, but he doesn’t care. Dr. Bensch fully believes he can win this case and tank Kiki’s medical career. He’ll most likely force Scott to use the photo and anything else he can dig up. Dr. Bensch will be determined to paint Kiki as a sex-crazed med student. He’ll want it to seem like she makes moves on all the handsome GH doctors.

After Scott exhausts all options, he may report back to Ava (Maura West). She’s paying him to throw the case, but he may struggle to do that. If Scott doesn’t go along with Dr. Bensch’s wishes, the doc could fire him. Dr. Bensch’s new lawyer might be even harder on Kiki, so that’d be quite a risk.

Scott may contend that he’ll minimize the damage and try to work through the pic issue quickly. Nevertheless, Ava will be concerned. On next week’s new GH episodes, August 6-10, Griffin will notice Ava’s anxiety. He’ll be impressed by how much Ava cares about her daughter, but she may not care for much longer!

Once court’s in session, Griffin and Kiki’s sex bomb could drop. Since Griffin’s always got such a guilt complex, he may even be the one to blurt it out. Anything can happen after Griffin gets on the stand. Ava’s sure to seethe when this all explodes, so stay tuned for some serious chaos.

Are you excited about this shocker being unleashed? We’ll give you updates as other GH news comes in. Stick with the ABC soap and don’t forget to check CDL often for the latest General Hospital spoilers, updates and news.