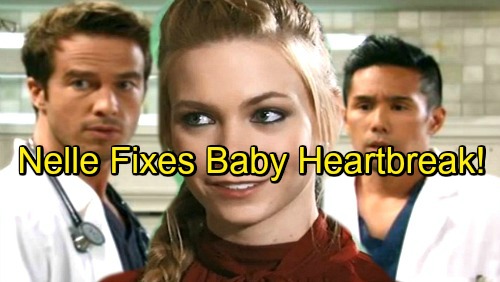 General Hospital (GH) spoilers tease that Brad (Parry Shen) will be in full-blown panic mode. When he returned to the crib for a feeding, Wiley was unresponsive. Brad will do CPR on his son in Tuesday’s episode, but the poor fella may be long gone. Lucas (Ryan Carnes) hasn’t had a chance to meet the kid yet and he probably never will. This is certainly a sad situation for these new parents.

However, GH undoubtedly has a plan in mind. We can’t forget about Nelle (Chloe Lanier) and Brad’s strange friendship. It’s always felt like it was building to some plot point, so it seems this is it. There must be a reason Nelle went into labor right as Brad’s baby died. General Hospital is most likely going to give Nelle’s child to Brad and Lucas, so let’s consider how this might play out.

Nelle is leaving the show, which means she won’t be around to raise her son or daughter on screen. Chase (Josh Swickard) has plenty of evidence against Nelle now, so she may be prison bound. Death is another option. If Nelle tries to flee and gets killed, she obviously won’t be involved in this kid’s upbringing!

Of course, Nelle could actually escape punishment and all the chaos in Port Charles. If she indeed makes a getaway, it’s still doubtful she’d take the baby with her. What good is this child to her now? Nelle only cares about herself, so she may just cut her losses and bolt. She would boost her chances of getting caught if she went on the run with a newborn.

No matter how Nelle exits, she’ll definitely stir up more trouble first. General Hospital spoilers say Nelle will do some taunting next week. She’ll ridicule those around her, so what’s about to go down? Could a paternity twist be in the works?

Perhaps Nelle cooked up a plot and made sure bogus test results were delivered to Michael. If she believes she’s headed to the slammer, this would be the perfect time to drop that bomb. Since Nelle’s broke and facing many years behind bars, she might as well add to Michael’s suffering. Nelle could stun him with the news that this isn’t even his baby.

Maybe Nelle slept with some random guy or even got a sperm donor. She’s awfully resourceful, so anything’s possible. Once Brad gets updates, he may see a chance to score another baby. Brad and Lucas will still be grieving over Wiley, but this could be their last shot at a kid for a while. They’ll need to take advantage of it.

Will Nelle agree to an adoption? Brad was one of the few people who showed Nelle kindness after all her scheming. If he begs, Nelle may let Brad raise this child with Lucas. It’d be better than handing him or her over to a stranger. Nelle could trust that they’d take care of this little one – if she even cares!

General Hospital spoilers have been hinting that Michael may not end up with a baby. When you add in Nelle’s exit and Wiley’s death, it all makes sense. Brad and Lucas seem destined to get Nelle’s bundle of joy.

It sounds like some exciting moments are ahead on GH. We’ll keep you posted as other details emerge. Stick with the ABC soap and don’t forget to check CDL often for the latest General Hospital spoilers, updates and news.