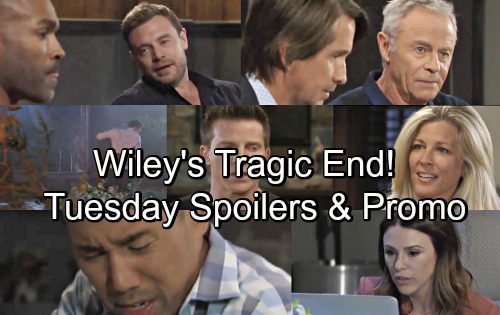 General Hospital (GH) spoilers for Tuesday, July 31, tease that Lucas (Ryan Carnes) will get some huge news. At GH, he’ll excitedly declare that he’s a father. Lucas will grin from ear to ear once he gets updates. He’s been stuck in surgery, so he’ll find out that Brad (Parry Shen) already took the baby home.

Lucas will share some warm moments with Julian (William deVry) before rushing off to meet Wiley. He’ll expect to have a wonderful first night as a family, but a tragedy will derail that plan. In Monday’s episode, Brad realized Wiley wasn’t breathing in his crib. He’ll frantically give his son CPR on Tuesday, but there’s a good chance it’s too late to save Wiley’s life.

General Hospital spoilers say Lucas will be perplexed a little later. Perhaps he’ll come home and find the place empty or maybe Brad will simply catch him on his way out of GH. Whatever the case, Lucas’ joy will soon turn to sorrow. It looks like Wiley’s dead, so that’s sure to be a crushing blow for both Lucas and Brad.

Meanwhile, Jason (Steve Burton) will explain Michael’s (Chad Duell) scheme to Carly (Laura Wright). He’ll admit that Michael wants Nelle (Chloe Lanier) to plot his murder. Carly will wonder how in the world Jason and Sonny (Maurice Benard) agreed to this. She won’t think it sounds safe at all, but Jason will offer reassurance. He’ll think they just have to trust that Michael can handle himself.

Michael is doing his best, but that car crash caused plenty of problems. Sonny managed to free Michael from his seatbelt, but that leg injury will provide one last hurdle. General Hospital spoilers say Sonny will pull Michael out of the car and try to hobble him to safety. It appears the vehicle will explode as they’re walking away, so that’ll add another layer of danger.

Will Michael and Sonny escape the flames? Let’s hope their situation doesn’t get any worse! Over with Nelle (Chloe Lanier), she’ll get some help from reluctant Liesl (Kathleen Gati). It’s only fair since Liesl caused the crash. Nelle’s in labor, so Liesl will serve as a coach and ultimately deliver this baby. Since Lucas and Brad’s kid is probably deceased, they just might end up raising Nelle’s child.

Elsewhere, Finn (Michael Easton) and Robert (Tristan Rogers) will mull over Anna’s (Finola Hughes) texts. Anna never showed up to see Robin (Kimberly McCullough), so they’ll realize these messages must be from her captor. General Hospital spoilers say Robert will want to find Anna on his own, but Finn will insist on helping. He can’t just sit back and do nothing at a time like this.

Across town, Drew (Billy Miller) will discuss his memories with Curtis (Donnell Turner). He’ll suggest that the flash drive is long gone, so he might as well give up on finding it. Of course, Drew doesn’t know that Margaux (Elizabeth Hendrickson) already snatched it up. She got it from the lost and found box, so she’ll see she’s dealing with on Tuesday.

General Hospital spoilers state that Margaux will look over Andre’s (Anthony Montgomery) files and try to figure out her next move. This gal definitely has a hidden agenda! We’ll keep you posted as other GH details emerge. Stay tuned to the ABC soap and don’t forget to check CDL often for the latest General Hospital spoilers, updates and news.