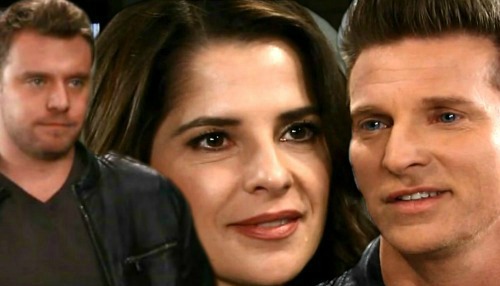 General Hospital (GH) spoilers tease that Jason (Steve Burton) and Sam (Kelly Monaco) will face some unfortunate interruptions. First, Alexis (Nancy Lee Grahn) will walk in on them. They’ll be on the verge of having sex when Alexis enters the penthouse. Sam and Jason will pull apart right away, but Alexis will know exactly what’s up. GH fans can definitely expect some awkward moments!

However, that’s nothing compared to the interruption that’ll come next. General Hospital spoilers say Jason and Sam will get a chance at a do-over later. Another visit to Sam’s penthouse will end with Jason being asked to stay. Once their lips meet again, they’ll get back to their lovemaking plan. It’s been a long time coming, especially for Jason.

We can’t forget that Jason was stuck in a Russian clinic for five years. When you add the year he’s spent pining for Sam in Port Charles, Jason could really use this! Sadly, a knock at the door will stop what they try to start. Drew (Billy Miller) will be on the other side of that door, so there’ll be some weird tension when he realizes what’s going on.

General Hospital viewers will recall that Drew recently pushed Sam away. He suggested that leaning on her isn’t in his best interest. Needing Sam makes Drew want her back, so it’s not a good situation for him. Nevertheless, Drew won’t know where else to turn. He’ll be hurting over Oscar (Garren Stitt), so he’ll decide he could use a pep talk from his ex.

Of course, Drew will change his mind once he sees the scene in front of him. He’ll realize he was right to steer clear of Sam. She’s inching toward Jason instead, so Drew will offer an apology and head for the exit. Unfortunately, Sam and Jason won’t be able to get a sexy vibe going again. They’ll have to hold off on their steamy dreams, but this could mark a major turning point.

General Hospital spoilers say Sam will struggle with her feelings. Part of her will want to move full-speed ahead, but things will remain complicated. Can Jason continue to be patient or will he ultimately have to look elsewhere for love? We’ll give you updates as other GH news comes in. Stick with the ABC soap and don’t forget to check CDL often for the latest General Hospital spoilers, updates and news.