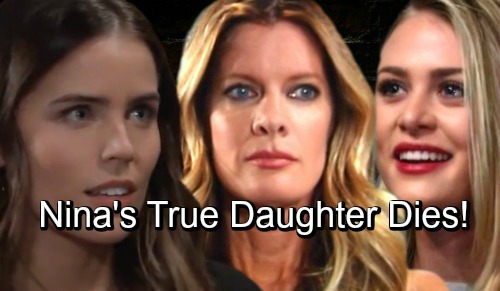 General Hospital (GH) spoilers tease that Nina’s (Michelle Stafford) daughter storyline will bring a few more twists. Most GH fans are in agreement that it just can’t be this easy. It didn’t even take that much effort for Curtis (Donnell Turner) to track down Sasha (Sofia Mattsson).

All of sudden, we’ve got two DNA tests confirming she’s Nina’s kid. When something’s too straightforward on a soap, it’s highly suspicious. General Hospital viewers have come to expect shockers, so we should probably brace for some big ones.

Nina’s first meeting with Sasha will end in disaster, so maybe there’s a reason for that. Perhaps Nina’s actual daughter would be more open to connecting with her. Regardless, Sasha may not be the daughter Nina’s seeking. The DNA proof might just be GH’s ploy to throw viewers off.

Nina recently brought up that half a heart pendant to Curtis. As far as he knew, Sasha didn’t have it. Of course, it’s possible Sasha just didn’t know to look before. It could be tucked in her attic somewhere. Still, a likelier option would be that the other half is with someone else. Whether she turns out to be Nina’s real daughter or not, it could leave Nina with doubts and questions.

General Hospital made some clear hints about Kiki (Hayley Erin) being Nina’s kid. It’s possible they shifted gears thanks to Hayley Erin’s looming exit, but what if they didn’t? What if Nina finds her daughter only to lose her just as quickly? That could happen if Kiki’s her child and gets killed off as expected.

GH already did a long-lost child story with Peter (Wes Ramsey) and Anna (Finola Hughes). We’re going to see them form a relationship eventually. Do we really need the same plot again? For Nina, perhaps General Hospital will try a different angle. They could take Nina down a dark path after she learns Ava (Maura West) not only deceived her, but inadvertently led to the death of her daughter.

Now that Ava and Ryan (Jon Lindstrom) are buddies, that could be where things are headed. Ryan’s a dangerous sociopath who could easily take out Kiki. Nina might find out the mother-daughter link just before or even right after the murder. Talk about devastating! Seeking revenge on Ava might be the only thing to get Nina through her grief.